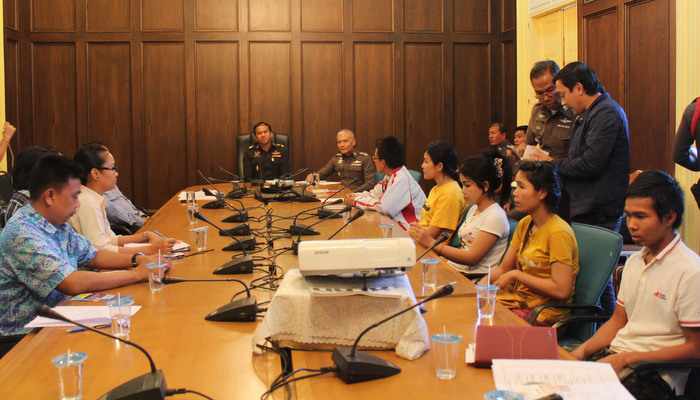 PHUKET: The Army has ordered Phuket police to trace the human trafficking network that led a group of Cambodians into debt-trapped servitude in a Phuket Town clothing store (story here).

The owner of the shop, Pasita Sangsakul, from Bangkok, defended her purchase of the staffers when she was questioned by Phuket City Police at Phuket Provincial Hall.

“I purchased the five workers from an agency. I had to pay 8,000 baht per person,” Ms Pasita said. “I never forced, threatened or did anything to them. They have all their freedoms.”

“If they pay me the money that I paid to the agency, they can leave the shop at anytime.”

Ms Pasita told police that she paid the workers 90 baht for each shirt or pair of pants they produced, and 1,000 baht per person per month as a food allowance. However, the workers claimed that they were paid only 90 baht a day.

One of the Cambodian women smuggled into the Kingdom made repeated pleas to her brother and sister-in-law for help.

The case came to light after the sister-in-law, who lives in Bangkok, filed a complaint at the Damrongtham Center after receiving the calls.

The sister-in-law, named by police only as Ms Petch, came to Phuket with a Thai friend and identified her relative to army officers, explained Commanding General of the 41st Military Circle Peerapol Wiriyakul.

“She called my husband for help, as she was paid 90 baht per day,” said Ms Petch.

The woman told her relatives she wanted to go home but did not have 10,000 baht – 2,000 baht more than the shop owner claimed was required – to buy her freedom.

The woman and her husband, who was also working at the shop, had allegedly paid 2,500 baht each to the human smugglers to be brought to Phuket. They arrived about two months ago, Ms Petch said.

In accordance with the announcement made by the National Council of Peace and Order (NCPO) allowing illegal workers until July 15 to be registered at the Employment Office, the five suspects were not charged for illegally entering the country and working here, said Maj Gen Peerapol.

“If they want to go home, we will help facilitate that,” Gen Peerapol said.

“The investigation into those responsible for smuggling the workers into Thailand will be handed over to the Phuket Provincial Police.”

Ms Pasita is not being charged for hiring illegal workers, also in accordance with the NCPO announcement, said Gen Peerapol.

“At this stage, we have yet to consider charging Ms Pasita for her involvement in human trafficking. However, I have ordered our team to investigate the human smuggling network that brought the Cambodians here,” Phuket Provincial Commander Krajang Suwannarat told the Phuket Gazette today.

Earlier this week, Thailand found itself in the international spotlight after the US State Department on June 20 downgraded it to the lowest level in its annual Trafficking in Persons report, putting it on the same level as North Korea, Iran and Syria.

“Anti-trafficking law enforcement efforts remained insufficient compared with the size of the problem in Thailand, and corruption at all levels hampered the success of these efforts,” the report said.

However, only days after the US cut military aid to Thailand, US Ambassador Kristie Kenney praised the ruling junta for its new regulation on migrant labor, describing it as “a good policy” to tackle human trafficking.