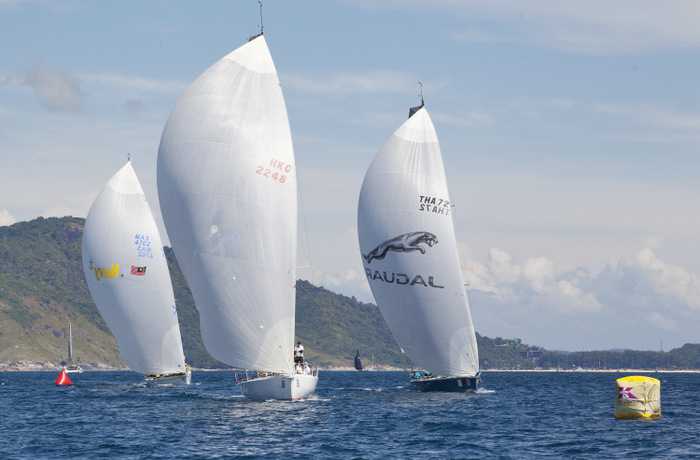 PHUKET; The final day’s racing of the 28th King’s Cup Regatta was set up beautifully to host some epic, close-quarters King’s Cup clashes.

Winds were good, crews were psyched, and the final day didn’t disappoint. Saturday saw all classes come to a close with a total of 123 keelboat races taking place during the week, in addition to 27 dinghy races; the combined 150 races is the biggest ever in the competition’s history, and one of the largest in Asia.

Of the two exceptional competitors in IRC 0 this year, it was Team Beau Geste who had the strength and consistency to carry their excellent performances throughout the regatta. A win in one of the final two races was enough to put them five points clear, earning the Karl Kwok’s team overall Phuket King’s Cup Regatta glory.

Karl Kwok, Skipper of Team Beau Geste, spoke of his delight, saying, “It was a big two days, lots of races and a big fleet too. After the first race this morning, we knew we had won – up until that point there were many things that could have happened.

“Neil Pryde, a friend and a foe since 1970, he’s a big-time racer loyal to this regatta. Boats after boats are optimized for the Southeast Asian circuit, so it’s been very close until a day ago. My last King’s Cup was in 2000, so 14 years … We’ve actually just sold the boat – so the new owner’s under a lot of pressure to continue the track record!

“Our 13-person crew would love to be back at the Phuket King’s Cup Regatta in the near future. I believe the King’s Cup is the biggest regatta in this part of the world. China is opening up, but this is still the best.”

Island Fling and EFG Mandrake shared the points in the final IRC 1 runs, with Winkelmann’s Island Fling team claiming overall victory by six points. Both Hong Kong competitors have been locked in battle all week, with EFG Mandrake performing well in several races but picking up a few fourth place finishes to their eventual detriment.

Bill Bremner’s Foxy Lady VI took the last two wins in IRC 2, but it was too little too late for the Singaporean team; TBG Team Premier had already put the class to rest on Friday, claiming a well-deserved PKCR victory which has broken Bill Bremner’s nine-straight-win run in the Phuket King’s Cup.

Foreign Affair has been in a class of their own all week in IRC 3, beating both Thai Navy boats (2nd and 3rd) in the last races. They had their regatta sewn up from mid-week with an unbroken string of first place finishes.

Pine Pacific defeated their handicap once again to beat a trailing fleet in Premier class, resplendent with some of the Regatta’s most beautiful yachts. The Thai-registered boat skippered by Ithinai Yingsiri made the 2014 campaign look completely painless.

In Bareboat Charter A, Andrey Duvanov and team Uhuru took first and third in the last two races, putting them two points clear at the top. Steady performances in an ever-evolving class gave them enough of a final advantage to win the A group. In Bareboat B, team Sarawadee took the final wins, adding to their week-long faultless regatta.

Open Charter saw Kata Rocks 3 victorious once again over all rivals, giving them the regatta victory after a week of exceptional results. Tony Pfeiffer’s crew have been untouchable since the first race.

Twin Sharks and Voodoo took a win each from each of the final Firefly 850 Sports races, the two boats just a point apart at the finish. This has been a thrilling cat and mouse game all week, playing out in fittingly exciting finale and typical King’s Cup style – Hans Rahmann’s Voodoo the overall victors.

No surprises in Multihull Racing – Alan Carwadine’s Asia Catamarans Hurricane again for the win, and an easy series victory. SY Ravensong was the only boat to finish in Classic class; Minnie won the Multihull Cruising class.

Thai team Sansiri Windstar has been brilliant in the 2014 Phuket King’s Cup, netting just enough points in the last two races today to win the Modern Classic class. Skipper Patinyakorn Buranrom inspired his young Thai crew to beat every rival in the class, and they thoroughly deserved their victory; a testament to the rapidly developing skills and commitment to the sport by Thai sailors.

International Dinghy Classes also drew to a close over the weekend. Saranwong Poonpat performed exceptionally well throughout the regatta to win Optimist boys, while Intira Parnpibul was second overall and fastest of the girls. In the Laser class, Nattawut Paenyaem was the winner, and Apiwat Sringam won the Topper class.

For the full results, visit www.kingscup.com