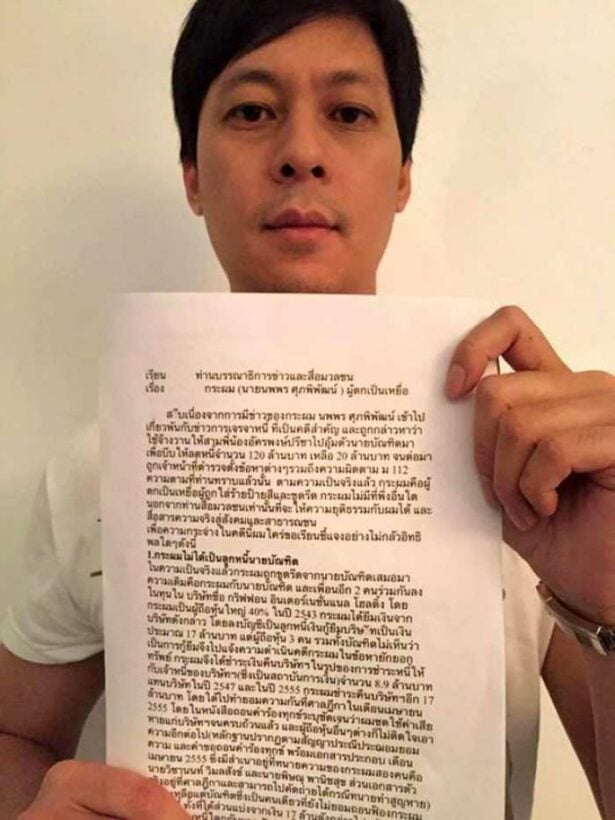 PHUKET: Royal Thai Police spokesman Lt Gen Prawut Thawornsiri has called on fugitive billionaire Nopporn Suppipat to turn himself in, and fight what the businessman claims are unfair allegations and distortions of the facts made against him.

Responding to an interview Nopporn gave AFP, Gen Prawut yesterday highlighted a number of what he called irregularities and inconsistencies in the Wind Energy Holding president’s comments.

Gen Prawut questioned why Nopporn did not fight Bunthit Chotewitthayakul in court if his claim that he had repaid the money he owed Bunthit were true.

Nopporn has denied police accusations that he helped orchestrate the kidnapping of Bunthit over a debt he owed Bunthit.

Gen Prawut described as unconvincing Nopporn’s claim that he had agreed to pay 5 million baht to Navy commander Parinya Rakwathin – despite saying he did not know Cdr Parinya well enough – so that an influential military figure could help hasten the repayment of the loan to Bunthit.

It has been rumoured that Nopporn fled to Cambodia since the story broke last week.

But a senior Cambodian immigration officer, Teb Yadee, dismissed the rumor and said Cambodian authorities would hand him over to Thailand if they arrested him. Teb added that searches at several casinos across the border from Sa Kaew did not find fugitive Pattani-based businessman Sahachai Jiansermsin, another suspect associated with the alleged debt-collecting racket supervised by crimebuster Lt Gen Pongpat Chayaphan.

In Nopporn’s interview, he denied police accusations that he had helped orchestrate the kidnapping of Bunthit, saying he fled to Cambodia on November 30 after discovering he would be charged with lese majeste.

“I knew Article 112 [the section of the Criminal Code relating to lese majeste] would mean I wouldn’t get bail … I couldn’t take that risk,” the 43-year-old told AFP in a phone interview from an undisclosed location early yesterday.

He said the media was his only hope for justice by reporting the truth.

Nopporn said he did not owe Bunthit money but had obtained a 17mn-baht loan from a company owned by three people, which included Bunthit and a lecturer at Krirk University who has a PhD.

“All three people did not deem it to be a loan and filed an embezzlement complaint against me before I had repaid the whole amount,” he said.

“Bundit is the only person who hasn’t withdrawn the complaint against me, despite him receiving his share of the 17mn baht. I don’t owe Bunthit any money since April 2012, when I fully repaid it.”

Nopporn said he had never heard of the three men with the surname Akarapongpreecha before June 23 – the date Parinya allegedly hired three men to force Bunthit to agree to receive only 20mn baht of the 120mn baht reportedly owed to him. “On my mother’s and father’s and everyone I love life [sic], I had never met or heard of them until this happened,” he said.

More than 20 people have been arrested so far in the probe.

Nopporn said he believed he was being targeted because he was perceived as being close to former premier Thaksin Shinawatra, although he insisted he was not a supporter of the ousted leader, who lives abroad in self-exile. “People said the police believed I was close to Thaksin, and with that I knew I had to run,” Nopporn said.

He said he had no intention of returning to Thailand any time soon because he believed he would be unable to get a fair hearing under the junta-led nation.

Billionaire wanted in Pongpat case ‘may have fled to Canada’