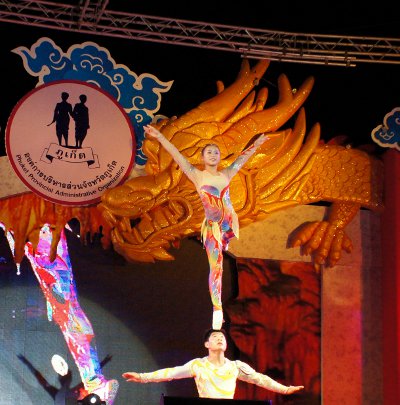 PHUKET: Thousands of people who attended a Chinese New Year celebration in Phuket Town last night were spellbound by a performance by one of the world’s top acrobatic troupes.

The fun began in the late afternoon, as scores of Thai and foreign tourists dined on a huge variety of local dishes on offer by vendors lined up under a walkway adorned with hundreds of red lanterns.

As they waited for the show to begin they watched dancing and martial arts demonstrations and posed for photos with two new “OrBorJor Mascots”, both bearing a striking resemblance to Paiboon Upatising in his spectacles and trademark pink blazer.

The show started at about 8pm with an address by Governor Tri Augkaradacha followed by a video segment extolling the virtues of Phuket, its ethnic Chinese cultural heritage, tourism attractions and the accomplishments of the PPAO under its current administration by Mr Paiboon and his Kon Baan Rao team.

The PPAO emcee made a point of saying that the PPAO was staging “the best Chinese New Year celebration anywhere in Thailand” to ring in the Year of the Dragon.

Many Phuket residents believe the 2012 Chinese Lunar Year will be especially auspicious for Phuket because the topography of the island resembles that of the legendary Sea Dragon Hai Leng Ong.

The three-act performance by the highly-acclaimed Henan Acrobatic Troupe lived up to the billing, with the fantastically-attired performers leaving the huge crowd breathless with countless feats of gymnastic excellence.

They used a wide variety of props including see-saws, unicycles, trampolines, spinning jugs and plates and diabolos (spools whirled and tossed on a string tied to two sticks held one in each hand).

However, some of the most amazing moves were accomplished with no props at all, including when a female performer managed to balance herself on her male partner’s head using only the pointed toes of one foot.

The only letdown came at the end of the show, when the seated crowd couldn’t even lift their behinds off their plastic seats to give the high-energy performers the standing ovation they clearly deserved.

The feature event was followed by a fireworks display and musical concert running late into the night.

Despite the huge crowd and limited space, there were no reports of violence or other unruly behavior, possibly because the event was alcohol-free.

Phuket Live Wire: The best apps for iPad owners on the island