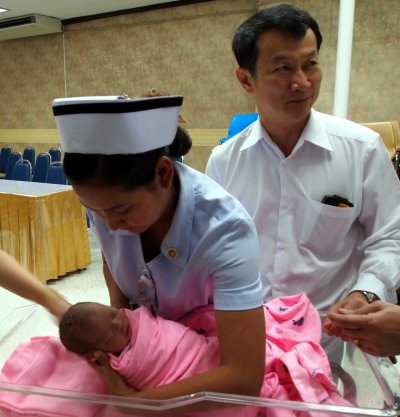 PHUKET: The Phuket Public Heath Office (PPHO) has made a public appeal for any information that may locate a woman who disappeared from Thalang Hospital shortly after giving birth to a baby girl on Friday.

“She gave her name as Patcharaporn Hawang, but had no personal identification documents with her and only 100 baht in cash. However, as staff could see that she was about to give birth, they took her straight to the delivery room,” said Dr Wiwat.

The mother-to-be told hospital staff that she was originally from Lampang and had lived in Phuket for a while before moving to Krabi after marriage. She said she had argued with her husband and travelled to meet her sister in Phuket. Unfortunately, her sister was not at home.

After the birth, mother and baby stayed at the in-patient department’s delivery room until at about 5:30pm. The woman told the patient in the next bed that she was going to wash her clothes.

That was the last time she was seen at the hospital.

“Staff searched the hospital and immediate area, but could not find her, so they reported her as missing to Thalang Police Station,” said Dr Wiwat.

It was about this time that hospital registration staff checked the name she had given against the national identification database. Failing to find a match, authorities now believe she used a false name.

“The infant is very young and needs love and care from her mother, said Dr Wiwat. “So I would like the mother to return to the hospital and stay with her baby.

“If she has difficulty in looking after the baby, the hospital will provide the appropriate support,” he added.

Thalang Hospital Director Arnon Kaewbumrung believes that, as the mother only had 100 baht, she left her baby at the hospital for financial reasons.

“This is the second case in three months of a mother abandoning an infant at our hospital,” he said.