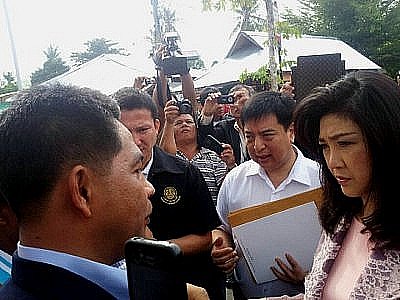 PHUKET: A delegation from Phuket yesterday lobbied Prime Minister Yingluck Shinawatra to review the decision by Cabinet to shelve the 2.6-billion-baht project to build an international convention and exhibition center (ICEC) in Phuket.

As PM Yingluck arrived to attend the mobile Cabinet meeting on Koh Samui this morning, Boonsupaa Tanthai, president of the Rak Phuket Club (“We Love Phuket Club”), presented the prime minister with a letter requesting that she review the decision.

The letter cited the October 2 Cabinet resolution to cancel the budget to build the Phuket ICEC without any public explanation. The only explanation given by Cabinet was that the budget funds would be spent on “other projects”, the letter explained.

Mr Boonsupaa told PM Yingluck that the cancellation of the project would do great harm to Phuket as well as other provinces in the Andaman region.

“An ICEC would generate much more income for Phuket since it would be good for the tourism industry. It could attract people to come to Phuket all year round,” he said.

Mr Boonsupaa explained that the cancellation of the project would also affect Phuket’s preparations for Thailand’s entry into Asean Economic Community (AEC) in 2015.

“We are now expanding the Phuket International Airport with a budget of 5.7 billion baht and other provinces in the Andaman region have already prepared [for the previously impending Phuket ICEC] by adding more hotel rooms.

“It would be a genuine pity if the project is canceled, since we will lose a great opportunity to make more money for Thailand,” he added.

The prime minster, who also heads the ruling Pheu Thai Party, responded to Mr Boonsupaa’s request with a simple “Ka” – the Thai equivalent to a polite “thanks” – before heading into the Cabinet meeting.

After PM Yingluck entered the Samui campus of the Surat Thani Rajabhat University’s International School of Tourism, the venue for the Cabinet meeting today, Mr Boonsupaa told the press, “As the representative of Rak Phuket Club, I would like to oppose the cancellation of the budget for the ICEC. I see that we will lose a lot of benefit for the whole region.

“If the project really is canceled, and after Prime Minister Yingluck and her Cabinet approved the project at the Cabinet meeting in Phuket earlier this year, I would say that the current government lied to all of us.

“Therefore, I would like to request PM Yingluck to reconsider the project for the benefit of everyone in Thailand,” he said.

It was not reported whether or not Mr Boonsupaa’s leadership of a large-scale protest against the establishment of red shirt villages in Phuket earlier this year had influenced the prime minister’s response.