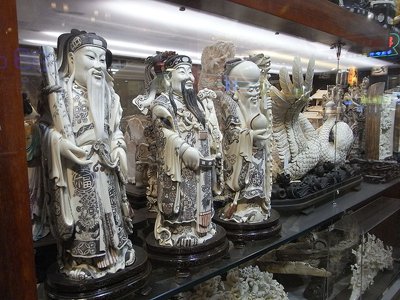 The seizure followed a tip-off from police in mainland China, where seven people have since been arrested in connection with the case. During the operation, Hong Kong Customs confiscated a total of 1,209 pieces of ivory tusks and 1.4 kilograms (3 pounds) of ivory ornaments, weighing about 3,813 kilograms (8,406 pounds), inside two containers shipped from Tanzania and Kenya to Hong Kong.

Hong Kong authorities said the container from Tanzania, which was declared as containing plastic scrap, was seized on Tuesday. Upon examination of the contents, Customs officers found 972 pieces of raw ivory tusks, weighing about 1,927 kilograms (4,248 pounds), and 1.4 kilogram (3 pounds) of ivory ornaments inside 91 bags of plastics scraps.

A day later, Hong Kong Customs inspected a container from Kenya which was declared as containing rosecoco beans. Instead, the customs officers discovered 50 bags of “rosecoco beans” which in fact contained an additional 237 pieces of raw ivory tusks, weighing about 1,884 kilograms (4,153 pounds).

The record haul, worth about $26.7 million, is Hong Kong’s largest ever of products from endangered species.


Poisonous fumes sicken 53 people at Berlin airport
Phuket Gazette / News Wires
PHUKET: More than 50 people became ill Saturday when they were affected by poisonous fumes at a major airport in the German capital of Berlin, local authorities said. Dozens of people were taken to area hospitals but none of them were seriously injured.

The incident began at around 7am local time when employees and passengers at Berlin Tegel Airport, the main international airport for the city, reported experiencing nausea and sore eyes. The reports prompted authorities to close the airport’s inner lobby and terminal A.

Scores of emergency personnel rushed to the airport to investigate the source of the poisonous fumes.

“We investigated the situation to determine the cause and whether any dangerous substances were present,” said Ralf Kunkel, a spokesman for the airport. “We haven’t found anything and therefore believe cleaning products were responsible.”

Police said officers from their forensic department detected a high level of ammonia in the air, likely caused by employees who used the wrong mixture of disinfectant while cleaning overnight.

Kunkel said 53 people, including employees, passengers and firefighters who responded to the scene, reported feeling sick and were treated.

“Fortunately no one was seriously injured,” he said. “Of the 53 people who felt sick, some were treated at the airport. Thirty-eight others were transported to the hospital and were released after treatment.”

Both the airport’s inner lobby and terminal A were reopened later Saturday afternoon.


Road rampage leaves woman dead, injures 13 in Wales
Phuket Gazette / News Wires
PHUKET: A woman was killed Friday and more than a dozen others were injured when a man deliberately drove his van into groups of pedestrians in the Welsh capital of Cardiff, police said. A suspect has been arrested on suspicion of murder.

The hit-and-run incidents happened between 3:30pm and 4pm local time when the van drove into the pedestrians at five different locations in the city.

A 31-year-old man was arrested on suspicion of murder just after 4pm when officers stopped the van near Penarth, about 5 miles away. His motive for the attacks was not immediately known.

“Unfortunately, and tragically… a 32-year-old female has lost her life,” Superintendent Julian Williams of South Wales Police said during a news conference. “Our thoughts are obviously with her family and our family liaison officers are with [them] at the moment.”

Thirteen other pedestrians were injured by the hit-and-run incidents, including nine people who were still receiving treatment yesterday at the University Hospital of Wales. Two of the adults remain in a critical but stable condition while five children may be released later today (Sunday).

Police were also investigating reports that the driver assaulted several people outside his vehicle during the rampage. “A number of the victims have been struck by the vehicle [but] there is [also] witness evidence to suggest that the person we have in custody has physically assaulted people outside of the vehicle,” a police spokesman said, adding that a weapon may have been involved.

U.S. Election campaign heats up in eye of the storm