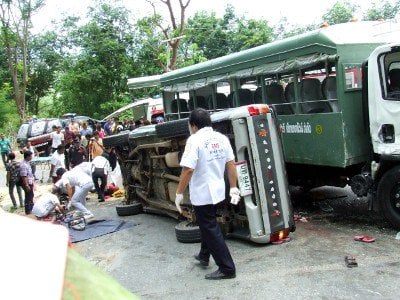 PHUKET: Eyewitnesses to a head-on smash between a pickup carrying about 20 people and a safari bus carrying tourists up Big Buddha hill say the accident has left at least three people dead, including one baby.

Australian tourist Alessia Nuccitelli, 19, told the Phuket Gazette that she saw a pickup carrying about 20 Burmese people speeding downhill from the Big Buddha toward the safari bus she and her family were on at about 11 am today.

The two vehicles collided, launching the Burmese out from the back of the truck.

None of the tourists on the bus was seriously injured, but the impact left the Burmese scattered among the debris on the road.

Many of the Burmese were injured by shards of glass from the tourist bus.

“It was horrible. I saw at least three people dead. One was just a little baby,” said Miss Nuccitelli.

The Australian tourist said the pickup was carrying far too many people.

“The driver was drunk… People here could smell the alcohol on his breath,” she said.