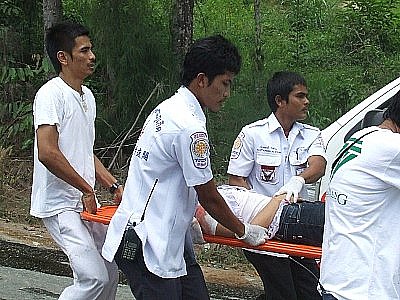 Among the dead was a baby girl estimated at only two to three years old.

The other deceased were two men and two women.

Fifteen others have been taken to Vachira Phuket Hospital, including the driver of the pickup, who was reported to have suffered a broken arm.

The driver was the only Thai in the pickup. The rest were Burmese workers from the Thanason project at Baan Borrae in Wichit.

The group was returning from paying respects to the giant Buddha image when the accident happened.

No foreigners travelling in the safari bus were taken to hospital, rescue workers confirmed.

This latest incident follows a safari jeep running off the very steep road after its brakes failed in January last year. That accident claimed the life of a young Australian tourist.

More Australian tourists were on the safari bus involved in the accident today.