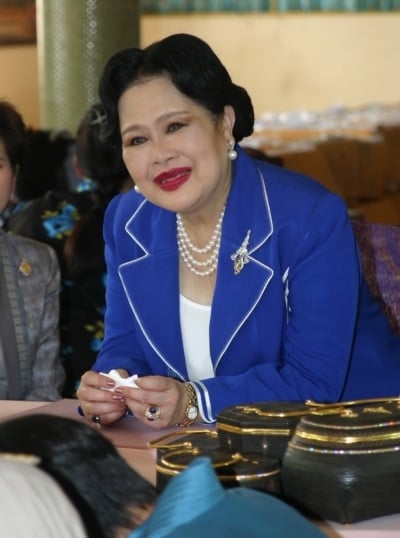 PHUKET: The Phuket Gazette joins the nation in celebrating the birthday of HM Queen Sirikit, the world’s longest serving consort of a monarch, who celebrates her 77th birthday today.

August 12 is also marked as Mothers’ Day in Thailand.

Born in 1932, Queen Sirikit was married to HM King Bhumibol Adulyadej on April 28, 1950, only a week before the coronation of King Bhumibol.

Queen Sirikit also bears the title Queen Regent of Thailand, bestowed upon her after she served as Regent while King Bhumibol undertook a period of service as a Buddhist monk.

She is known for her charity work, which includes serving as honorary President of the Thai Red Cross.

Queen Sirikit received the UNICEF Recognition Award and the UNIFEM Award of Excellence in 1992 in recognition of her work fostering the role of Thai women.

Organizations across Phuket will today hold celebrations and merit-making ceremonies in honor of Queen Sirikit.

Central Festival Phuket will hold a mothers and daughters fashion show entitled ‘My mom is beautiful’, from 4pm to 5pm.

A candle-lighting ceremony in honor of Queen Sirikit will take place there at 7pm.

Jungceylon in Patong will hold a candle-lighting ceremony at 6pm.

Phuket Rajabhat University will host a variety of activities from 1pm, including a special Mothers’ Day speech; songs and dance; and awards presentations for ‘good mothers’ and for an essay competition.

Rassada Muncipality will hold a mangrove planting ceremony at Chalermprakiat mangrove forest from 9am until noon.

The Grand Opening Ceremony for the new Regional Blood Headquarters on Rattakosin 200 Pee Road in Phuket City will take place between 8:30am and 4:30pm.

As on most other public holidays in Thailand, the sale of alcohol is prohibited.