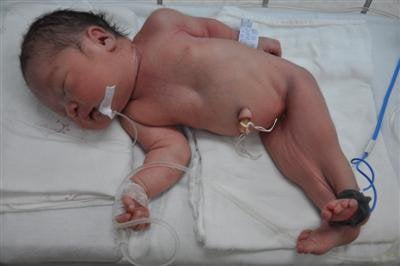 PHUKET CITY: Surgeons are working desperately to save a Burmese baby born in Phuket with a rare birth defect known as ‘mermaid syndrome’, a condition in which both legs are fused together from the torso down.

The infant, named Sui, was born at Vachira Phuket Hospital at 8:40pm on Sunday.

Weighing 2,240 grams at birth, Sui is the third child born to the low-wage worker.

The condition occurs in about one in every 70,000 births, Dr Sirichai said.

It is usually fatal within a few days of birth due to abnormal kidney and bladder development.

Doctors have not yet been unable to determine Sui’s sex, but suspect the infant to be a girl.

Sui has already been taken to the Prince of Songkla University Hospital in Songkhla’s Haad Yai District, the top medical facility in the south, where specialist surgeons will perform a series of delicate procedures.

Success will depend on the health of Sui’s vital organs, especially the heart, kidneys and urinary tract.

Just 300 babies born with Sirenomelia around the world are known to have survived childbirth, but the vast majority die soon thereafter, Dr Sirichai said.

The first surgery in Haad Yai will likely involve surgical construction of a canal through Sui’s abdominal wall, allowing stools and urine to pass, he said.

“If this isn’t done soon, Sui will probably die,” he said.

If Sui survives this surgery, attention could then turn to disconnecting the fused limbs, which are bound together with connective tissue.

Treatment costs will be covered by the state under the 30-baht insurance scheme.

Like all legally-registered migrant workers, Sui’s mother is covered under the program, he said.