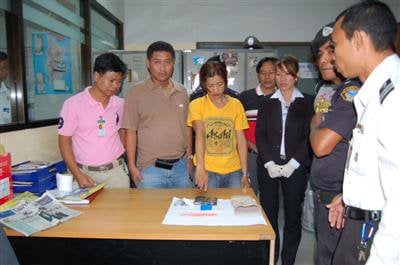 PHUKET CITY: A Thai woman was caught at Phuket International Airport on Monday trying to smuggle a large stash of ya bah (methamphetamine) pills onto the island, police say.

Pojjanee Thuptim, 31, was caught with 1,330 ya bah (methamphetamine) pills stashed in a thigh support of the type used for sports injuries, a source at the Phuket branch of the Narcotics Suppression Bureau (NSB) said.

Ms Pojjanee, from Kanchanaburi province, flew into Phuket from Suvarnabhumi Airport in Bangkok at around 3:30pm.

Phuket NSB chief Sutthirat Thojumpha rushed to the airport to oversee the search and subsequent arrest of Ms Pojjanee.

A source at the NSB told the Gazette Ms Pojjanee was probably just acting as a delivery agent for a drug smuggling ring.

NSB agents will investigate further and try to bring the ringleader to justice, the source said.