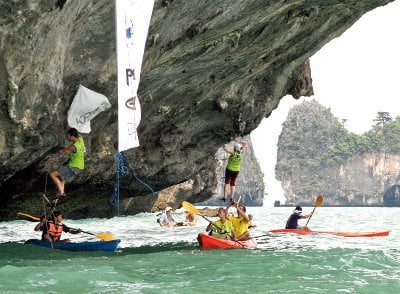 PHUKET: The karst topography and stunning beach-side limestone edifices of Krabi once again played host to the Krabi Rock and Fire International Contest on April 28 and 29.

The 2012 event, organized by the Krabi Rock Climbing Club and the Tourism Authority of Thailand, is designed to highlight Railey and Ton Sai as world-class rock climbing destinations.

The contest was composed of three different events this year, each with their own prize purse: lead climbing marathon (60,000 baht), deep-water soloing (45,000 baht) and a fire contest (16,000 baht).

Each of the three competitions were independently registered for, so the rock climbing gurus weren’t forced to play with fire and the fire spinners could keep there feet on the ground.

Stunning weather on the first day of the event left all 24 teams of climbers out in the sun for parts of the lead climbing marathon.

With 50 routes selected for the competition on just five of the prominent climbing walls in Railey, there was plenty of rock for the two-member teams to attack.

Teams were awarded points for each route successfully scaled. Points were dependent on the difficulty level of the route, which ranged from 6a to 8a on the French climbing scale, and how many penalties were committed during the climb. All falls; takes; improper use of quickdraws, bolts, slings and fixed protection; or any other actions the judge deemed inappropriate, were penalized.

Given the difficulty level of the majority of the routes, this was clearly an event geared towards the upper echelon of climbers. But despite the big money and the serious nature of the event, climbers raved about the positive and encouraging attitudes of the judges. Unlike the intimidating, stony-faced judges, found elsewhere, the Thai judges, while remaining impartial, were just as vocal as the crowd, when they saw a climber push through a tough crux on a route.

The evening festivities started up after dark on Railey West Beach with the fire competition (see Your Phuket, page 26).

The deep-water soloing (climbing without rope or protection over deep water) event had a slow start the next day, but eventually climbers were taken out to Railey Bay Resort’s barge, anchored close to three selected deep-water soloing routes on Sunset Wall. Music blasting from the barge created the perfect party mood for competitors and crowd alike.

Each climber had five minutes to attempt each of the routes, which ranged from 10 to 25 meters in height. Once completed they had 30 more seconds to jump from the cliff, or they lost half the points gained during the climb.

The most impressive performance on the final route was by Urs Christian Schonenberger (Switzerland), who ended up taking first place in the event.

Urs, a banker who has spent the last 20 months on a around-the-world trip, spoke with the Phuket Gazette about deep-water soloing and the competition.

“This was the first time for me that I really did deep-water soloing like that. I tried it once in a little bit in Croatia, but… not on such good cliffs. This area is a good combination of holidays and climbing,” he said.