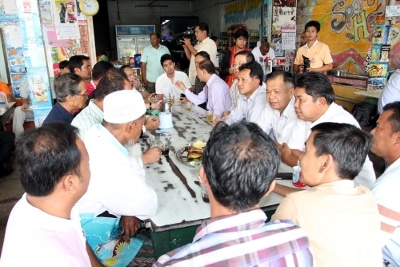 PHUKET: In a marked departure from the usual line in tackling drugs on the island, Phuket Vice Governor Chamroen Tipayapongtada yesterday took time out to sit down with local village leaders and discuss the drug problem over a cup of coffee.

Those cases resulted in the arrests of 1,810 suspects, said V/Gov Chamroen.

“But in order to solve the drug problem, we need the cooperation of local people,” he said.

“We are launching a project ‘Government Officers Meet Local Leaders”. We will send officers out to villages to meet the local leaders and the people so they can listen to the problems and come up solutions together.

“We expect this to effective in suppressing drugs because only the local people know how severe the drug problem is in their area,” V/Gov Chamroen said.

He added that Cherng Talay would be the first area targeted by the project.

“We will send officers to investigate the area and encourage the local officials to work with residents in the area and brainstorm solutions to the drug problem,” he said.