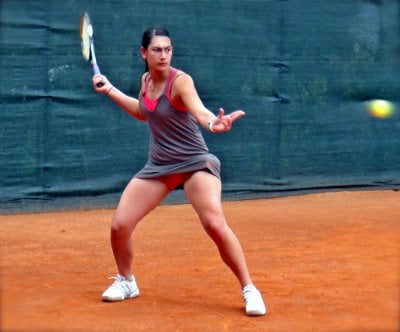 Confident she can advance to the highest echelons of the sport, Miss De Cesare has her sights set on eventually breaking into the world’s top 10.

“One day, I want to win all the grand slam tournaments,” she said.

Despite losing her professional debut to German Julia Schruff in Italy earlier this year, Miss De Cesare is determined to bounce back.

The experienced 28-year-old German, ranked 53 in the world, took a convincing 6-0, 6-2 win against the youngster, who became the youngest of the WTA tour when she joined last month.

But De Cesare believes she is a better player as a result of the straight-sets loss.

“I’m getting closer and closer to my dreams every day. Maybe I will never reach them, but I won’t stop working towards them,” she said.

Phuket-born De Cesare left Thailand aged 12 bound for the US for training.

She subsequently honed her increasing clay skills in France and Spain.

Currently based in her father’s native Italy, De Cesare has a rigorous training regime each day.

Now she is under the guidance of the national coach of Federation of Italian Tennis, Luigi Fiordelisi.

She is also followed by a team of professional physiotherapists and fitness trainers.

Before embarking on her travels, the young De Cesare attended both Kajonkietsuksa School in Wichit and the British International School Phuket in Koh Kaew.

Today, she studies in grade 11 through a US-based school’s online program.

Although De Cesare has to balance her education around her training schedule, her travels and experiences have allowed her to attain impressive skills of the kind that seldom result from classroom study.

She is fluent in four languages: English, Thai, Italian and Spanish.

De Cesare is confident she will return to Phuket soon.

“Next year I will be in Thailand to visit my family between tournaments in Asia. Perhaps I will play when I’m there,” she said.

There will be regular updates on De Cesare’s progress in upcoming issues of the Gazette.