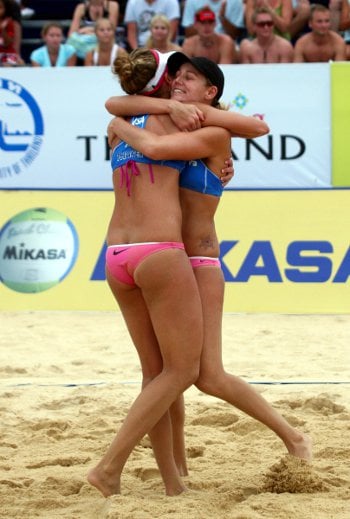 PHUKET: Organizers of the Phuket Thailand Open have confirmed that qualifying matches for the international beach volleyball event will go ahead as planned from 9am tomorrow on all match courts on Karon Beach.

Although organizers are keeping an eye on the weather, only heavy rain will be allowed to delay play, said Kaewjai “Pu” Kaewpratoom of event organizers Pentangle Promotions.

The confirmation follows a press conference yesterday held to highlight that fact that the year-ending Phuket leg of the 2010 Swatch FIVB Beach Volley World Tour will feature 73 teams of over 500 players from 28 countries.

The event is expected to generate some 150 million baht, TAT Phuket office Director Bangornrat Shinaprayoon said at the press conference at the Kata Beach Resort.

Qualifying matches will be held tomorrow and Thursday, with main draw matches being played Thursday through Sunday on the central court in Karon.

Matches will start from 9am, except on finals day when matches start at 3pm.

Admission to watch the matches is free.

The final and third-place playoff on Sunday will be broadcast to half a billion homes worldwide.

In Thailand, Sunday’s matches will be broadcast live on NBT.

The FIVB women’s world tour this year has been dominated by four countries: Brazil, China, Germany and the US.

Brazil are represented by four teams, including the world number one pairing of Larissa Franca and Juliana Felisberta Da Silva.

China’s top team of Xue Chen and Zhang Xi are looking to extend their run of four successive podium finishes.

Germany’s most successful team of the tournament, Sara Goller and Laura Ludwig, are leading the European charge.

The American teams include both the current world champions and reigning Phuket champions, Jen Kessy-Boss and April Ross as well as current Olympic Champion Kerry Walsh partnered by Nicole Branagh.

Thailand, with three teams in the main draw, will be aiming to improve on their performance last year, when the host nation’s best placing was 25th.

In addition to the Swatch FIVB World Tour tournament, there will be a full supporting program of amateur tournaments, an international event under the Beach Volley Around the World umbrella with teams from Asia and Europe, and a Phuket Inter-hotel challenge supported by Federbrau beer.

For kids there is the PTT Schools Cup and PTT beach volley camps, plus many other activities and sales outlets in the sponsor zone, including a beer garden and games area.

Karon Deputy Mayor Somepong Dappetr yesterday cautioned people traveling to Karon Beach to watch the matches to beware of roadworks in the area.

In particular, motorists should exercise caution along Patak Road, which is being widened by the Phuket Highways Office.

Another area to watch is the two-kilometer stretch of the beach road from Karon Circle to Karon Stadium, where power cables are being buried as part of a 45-million-baht Karon Municipality development project, he said.

The latest Meteorological Department forecast for the 24-hour period starting at noon today calls for “fairly widespread thundershowers covering 80% of the area and isolated heavy rain”.

Winds, forecast to be northeasterly from 15kmh to 40kmh, could also have a strong bearing on play.

As a proud sponsor of this event, the Gazette wishes all competitors the best of luck.