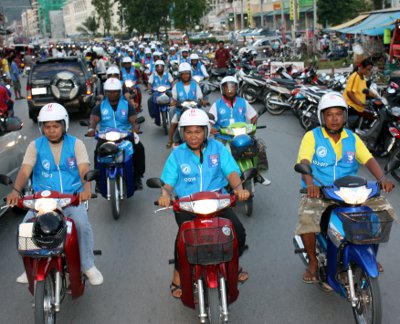 PHUKET: About 500 Phuket motorbike riders are expected to make their way along the beach road in Patong on November 16 to highlight the importance of wearing safety helmets.

The motorcade comes before the January 1 deadline when Kathu Police will begin the enforcement of the law requiring all motorbike passengers to wear helmets, Lt Col Arayapan said.

To get the motorcade off to a rolling start, Lt Col Arayapan has enlisted the support of Preechavude “Prab” Keesin, president of the Patong Taxi Federation and son of Patong Mayor Pian Keesin.

The federation has more than 1,000 members, including tuk-tuk, motorbike and car taxi drivers.

The motorbikes will depart from the junction of Phang Muang Sai Khor Road and Prachanukroh Road at 3:30pm.

Behind the motorbikes will be people walking along the route in a show of support.

Anyone wanting to join the procession are asked to be at the junction no later than 2pm.

Participants will make their way toward the beach, then progress along the beach road to Patong Sports Field, where an officiating ceremony will be held followed by a football tourney and on-stage entertainment.

Roads along the route will be closed to traffic during the parade.

Lt Col Arayapan said another event to promote the campaign will be held on December 29.

His officers will start enforcing the helmet law from January 1, he said.

“Motorcycle drivers and passengers found not wearing helmets will have to watch the film on road safety and traffic law, just as they do in Phuket Town,” Lt Col Arayapan said.

He was speaking of a locally-produced film, first shown at Phuket City Police Station in early July, that graphically depicts head injuries sustained by motorbike riders who crash while not wearing helmets.

Motorcyclists and riders caught at police checkpoints without helmets have their licenses seized, only to be returned after they have viewed the “scared straight” film and listened to a lecture on road safety issues. The new approach is part of the “100% helmet use” campaign that began in Phuket City Police District earlier this year.

Phuket Provincial Police decided to extend the effort island-wide starting with the arrival of the new year.

Phuket City Police say they will begin fining all riders without helmets from July 1 next year.

Kathu Police, however, have yet to establish a precise date when they will follow suit,
said Lt Col Arayapan.

“Before the campaign was launched, about 15 riders without helmets died in accidents in Phuket Town every month, but since we started enforcing the law the number has fallen to about two to four people a month,” he said.