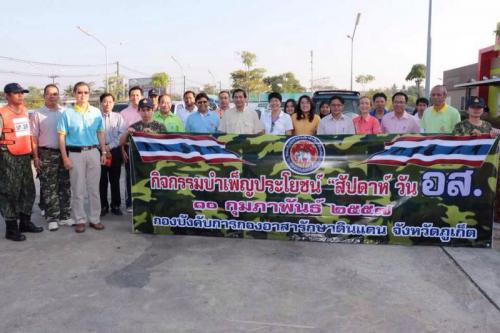 A group of about 200 people, including Vice Governor Chamroen Tippayapongtada and Phuket Provincial Employment Office Chief Yaowapa Pibulpol, as well as government officers and volunteers fanned out on both sides of the road in front of Big C to pitch in.

After walking north for 2km, the governor had filled three bags with rubbish, and was ready to urge local residents to keep the island clean.

“We want to promote Phuket tourism, but we have a lot of trash on this road, which is the main route into town from the airport. A lot of tourists are going to drive by and see the trash. That doesn’t give us a positive image.”

“We are the hosts in this province, and as such we must be ready to properly welcome tourists.”

Noting that trash is something we produce on a daily basis, the governor recommended people simply put it into bins and not dump it in public places.

Urgent call for O-negative blood to save Norwegian man

Two clipped in Phuket beauty salon with over 90kg of marijuana