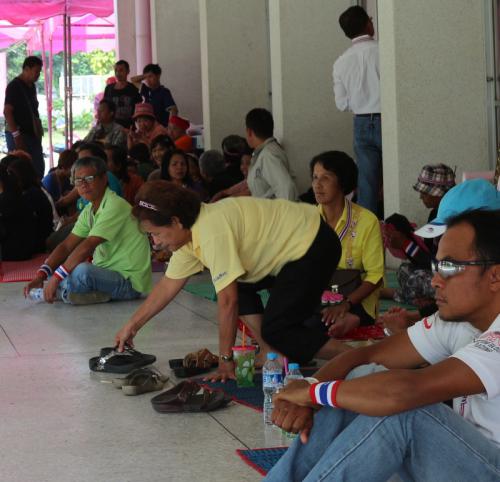 PHUKET: The government has suggested registering election candidates for constituencies in Phuket and elsewhere in the South at local military bases or police stations if the process continues to be disrupted by anti-government protesters (story here) – but such a move would require the approval of the Election Commission (EC), Deputy Prime Minister Surapong Tovichakchaikul said yesterday.

Mr Surapong was speaking after he and other key government figures met with Election Commission chairman Supachai Somcharoen and other EC members to discuss the failure of candidacy registrations in eight southern provinces in the wake of pressure by local supporters of the anti-government People’s Democratic Reform Committee (PDRC).

Individual constituency registrations failed in another seven provinces in the South yesterday, the third consecutive day on which disruptions have occurred. The registrations are scheduled to end on Thursday.

However, a candidate from the ruling Pheu Thai Party managed to register in Phuket Sunday (story here).

Mr Surapong said the Defence Ministry permanent secretary and the Royal Thai Police commissioner, both of whom were present at the 90-minute talks yesterday, had approved the use of facilities under their respective authorities as registration locations.

“It is ultimately up to the EC whether to take this option,” he said.

EC chairman Supachai said earlier that an EC evaluation of the registration process would be made on Thursday, and a report on the situation would be submitted to the caretaker government.

He said if elections fail to be organized in certain constituencies, the caretaker government could issue a royal decree to postpone those votes. The decree would have to be issued before February 2, the scheduled date of the election.

“But after the date in February, a separate consideration will be made by the EC,” he added.

In his earlier statement, Mr Supachai said military barracks would not be an ideal location for registration, because a fair election should be organized entirely by civilian authorities, but the option was on the table as a last resort.

“We would not wish to see applicants transported in armored personnel carriers to undergo registration, while police stations holding registrations would certainly be targeted [by protesters],” he said.

Mr Supachai would not disclose details of a meeting between the EC and government figures on Sunday. He said what was discussed should lead to a way out of the problem, as “the caretaker government has eased its tough stance and offered a goodwill gesture, but I will not speak further on this meeting.”

He said high-ranking former Democrat MPs had agreed to meet with the EC today, but the PDRC leadership had not responded to an EC request that they join the talks.

Pheu Thai Party leader and caretaker Interior Minister Charupong Ruangsuwan announced earlier that the EC was authorized to postpone voting only in case of natural disasters – not to call off an entire election. The EC would be guilty of malfeasance if it failed to perform its duties, he said.

Mr Supachai and all the other commissioners visited Bangkok’s Thai-Japanese Stadium to observe candidacy registration for individual constituencies yesterday. He said later that three unnamed EC members said registration could be postponed if there was a recurrence of the violence that erupted there on December 26.

They also threatened to file charges against the EC officials for failing to perform their duties.