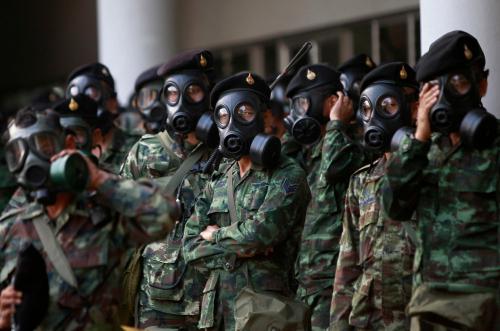 PHUKET: Thailand’s powerful but politicised army sought to ease fears on Monday that it might step in to resolve a festering political crisis, while anti-government protesters entrenched positions around Bangkok as they seek to disrupt a February election.

The latest round of an all-too-familiar political conflict in Thailand has dragged on for weeks. It flared last week into deadly clashes between police and protesters outside a stadium where registration for the February 2 poll was under way and at other rally sites around the Thai capital.

The head of the military added to the growing sense of unease on Thursday when he refused to rule out a coup after those clashes. A policeman and a protester were killed when an unidentified gunman opened fire, and scores were wounded in the clashes.

The demonstrators are determined to topple Prime Minister Yingluck Shinawatra, who they accuse of being a puppet of her self-exiled brother and former premier, Thaksin Shinawatra.

Thai army chief General Prayuth Chan-Ocha said after Thursday’s clashes that “the door was neither open nor closed” on a coup, and social media across Thailand has buzzed with rumours of a coup ever since.

Army spokesman Winthai Suwaree sought to play down those fears, telling reporters on Monday that the rumours were causing “confusion and speculation”.

“The army would like to insist there’s no secret meetings or any operations by the military as speculated,” Winthai said.

Until last week, the military had sought to remain aloof from the conflict, which represents years of rivalry between Bangkok’s middle and the mostly poor, rural supporters of Ms Yingluck and Mr Thaksin in the populous north and northeast.

The violence flared again in the early hours of Saturday when a protester was killed by an unidentified gunman who opened fire on a small group of tents set up by protesters outside Yingluck’s offices at Government House.

The rest of the capital remained relatively quiet. Tension flared again on Sunday when a large firecracker was thrown at another protest site, at a bridge over a canal near Government House, wounding five demonstrators.

That prompted the protesters to build sandbag walls across a street leading to their rally site at the bridge.

Most of the protests have been centred in Bangkok, although demonstrators have also blocked registration for the polls in seven provinces in the south (story here). The protesters, led by fiery former lawmaker Suthep Thaugsuban, and the main opposition Democrat Party have many supporters in the south.

The Democrats have declared they would boycott the election which Ms Yingluck called, and would likely win, in a bid to end the stalemate. The pro-establishment Democrats have not won polls since 1992.

Mr Suthep and his followers want an appointed “people’s council” to take over and begin a reform programme before another election is held, at some point in the future.

Ms Yingluck is looking increasingly isolated. More chaos on the streets could invite intervention by the military, while the judiciary could also step in if the deadlock persists.

Thailand’s army has staged or attempted 18 coups in 81 years of democracy, including the removal of former telecoms tycoon Mr Thaksin in 2006.

The protesters draw strength from Bangkok’s conservative middle class and elite, who resent the rise of what they see as the venal, billionaire Shinawatra family and their political juggernaut which has won every election since 2001.

They say Thaksin has effectively manipulated a fragile democracy by buying the support of the rural poor with populist policies such as cheap healthcare, easy credit and subsidies for rice farmers. Many poor voters say Mr Thaksin was the first leader to actually keep election promises to help them.

Mr Thaksin fled into exile in 2008 before being sentenced to jail on graft charges he said were politically motivated.

PHUKET: Bloody incidents have continued at the rally sites of anti-government demonstrators in Bangkok, with six more civilians being injured yesterday afternoon.

One of the victims suffered an injured right eye while protesting in the Makkhawan-Rangsan Bridge area.

Following the latest incident, Metropolitan Police Commissioner Lt Gen Camronwit Toopgrajank said he seriously wanted to catch the culprits to clear any distrust and rumors that police officers may be behind these attacks.

“The police work for the Thai people and the demonstrators are also Thai people,” he said.

He added that one policeman was also killed during confrontations between police and demonstrators at the Thai-Japan Stadium on Thursday, and suggested that a third party might be instigating violence.

“If you have still photos or video recordings of violent incidents, please forward them to the police. We have cash rewards for useful tip-offs,” Lt Gen Camronwit said.

He added that up to 2 million baht in donations had been given to the police to use as rewards in order to facilitate investigations.

A guard for the anti-government protesters was also killed in the gun attack at 3am on Friday.

Assoc Prof Dr Surasak Leelaudomlipi, director of the Ramathibodhi Hospital, said four protesters had been rushed to the hospital with injuries yesterday afternoon.

“They are between 18 and 26 years old. We have already allowed three of them to return home,” Mr Surasak said.

The patients had been hit by unknown objects, he said.

According to Bangkok Metropolitan Administration’s Erawan Emergency Medical Services Centre, the first person injured was a 24-year-old man. He had injuries to his face, right eye and right arm.

The second patient brought in was a 26-year-old man, who had sustained wounds to his left hand.

The Makkhawan-Rangsan Bridge area has been a protest site for demonstrators under the leadership of the People’s Army to Overthrow the Thaksin Regime and the Dharma Army.

Samdin Lertbut, a coordinator for the Dharma Army, said that the people were injured after two men on a motorcycle hurled giant firecrackers into a tent of volunteer guards at about 1:30pm yesterday.

“Six people were injured. We rushed four to Ramathibodi Hospital,” he said.

PHUKET: According to many protesters led by the People’s Democratic Reform Committee (PDRC), there will be only three options left for them if there is an election on February 2: register a “no vote”, spoil the ballot or just don’t turn up at the election at all.