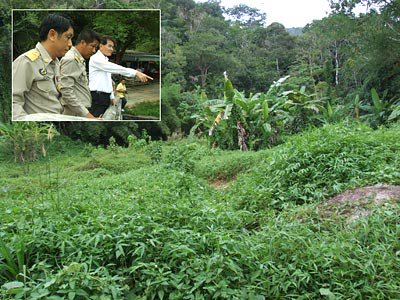 KATHU, PHUKET: The Phuket Provincial Office will seek a budget from the central government to construct a new reservoir at Kathu Waterfall in order to solve chronic dry season drought problems in the area.

He was accompanied by Kathu District Chief Siripath Patakul, Kathu Tambon Chief Sarawuth Kaewpradub, and a number of other local officials.

Gov Wichai said people in Kathu District had complained to him about a lack of water during the the island’s dry season, the four-month period when monthly rainfall often dips below 100 millimeters.

Describing it as “unbelievable” that an island with so much annual rainfall could experience such shortages, Gov Wichai, after talks local officials, agreed to push for the new water supply source at Kathu Waterfall, which flows year-round.

Gov Wichai told the press he had already asked the Phuket Irrigation Office to submit within 30 days a budget plan based on the construction of a dam to create a reservoir 30 meters deep with an approximate storage capacity of 500,000 cubic meters.

Under the plan, an existing basin located about half a kilometer away on Soi Namtok 5 would also be developed, increasing its current storage capacity to 150,000 cubic meters, he said.

“If the government agrees with me and provides the budget, the project could be finished by the end of this year,” Gov Wichai said.