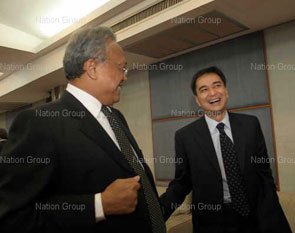 The summit, initially to be held from April 10-12, had to be canceled after it was stormed by red-shirt protesters in Pattaya.

Dates for the next summit could not be fixed yet because several leaders have not been able to confirm if they would be attending.

India, which is currently undergoing general election campaigning, might take a while to form a new government, PM Abhisit said.

Some countries have funding problems and may not be able to afford sending delegations to Thailand within such a short period, he added.

Thailand is expected to hold a series of Asean meetings in the coming months. After the Asean+3 and East Asia summits, the country would need to call the Asean Ministerial Meeting in July and another summit along with related meetings in October.

The Asean+6 summit with dialogue partners (Australia, China, India, Japan, New Zealand and South Korea) was supposed to be held back-to-back with the summit of 10 Asean leaders, but some East Asian leaders were not available.

The Foreign Ministry is currently consulting with 15 countries in Asia and the Pacific to fix the date, according to ministry spokesman Tharit Charungvat.

“Yes, we have June in mind but we need to consult with other leaders to choose the best dates,” he said.

Asean chief Surin Pitsuwan earlier suggested that Thailand host the summit as soon as possible for the benefit of the grouping as a whole.

However, Abhisit said the foreign ministry was considering Phuket and would ask other leaders if they would agree to having the meeting here.

Phuket is a political stronghold of the ruling Democrat Party.

Gov Wichai to push for reservoir at Kathu Waterfall