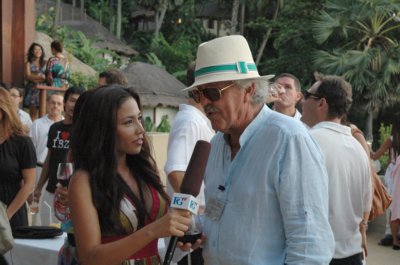 The event, organized by Summer in Phuket campaign leader Nick Anthony, attracted about 200 participants who pledged to join forces in “canceling Low Season” and promoting the period between April and November as ‘Phuket Summer Season’.

During a presentation outlining an action plan to re-brand the eight-month period traditionally referred to as ‘Low Season’, Mr Anthony pointed out that Phuket tourism usually drops dramatically during this period due to the widespread belief that Phuket is constantly plagued with bad weather at this time.

“We aim to expose to the world the fact that during summer (April-November), the period formerly known as the Low Season, Phuket actually has an abundance of delightful sunny weather,” he said.

Mr Anthony hailed the evening a success and expressed his confidence that the campaign’s message will reach those who can make a difference in the international tourism sector.

“The high turnout for tonight’s event shows that the concept of canceling Phuket’s low season in favor of Summer Season has the support of many key figures in the tourist industry,” he added.

Participants questioned by the Gazette on the night were also positive about the impact of the campaign’s message. Eric Smulders, owner of the Soul of Asia Art galleries, said, “I think it’s wonderful and I’ve been saying the same thing all along. Phuket summer season is much better than the winter season as it is cooler and there are fewer tourists. I think this is a great idea”.