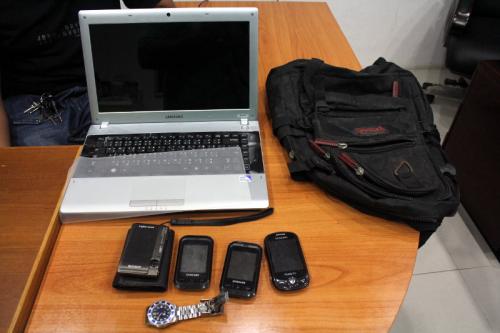 PHUKET: It was briefly thought they had snared the Phuket gold shop killer (story here) when Karon Police yesterday arrested a burglar with a limp – one of the key characteristics in the search for the murderer.

Phuket City policeman Lt Col Prawit Engchuan joined the questioning of the suspect but said afterward, “We determined that he has no connection to the gold shop robbery.”

Kornwit Jitsophon, a 26-year-old Nakhon Sri Thammarat native, was tracked down after he was identified on CCTV by a former sweetheart, a fried-chicken-vending ladyboy (transsexual).

Karon Police received a report on Songkran Day (last Friday) that a thief had forced open the back door of local resident Boonkuer Gonesrang’s house and burglarized it.

During their investigation, officers found CCTV footage of the area near the house.

“When we reviewed the CCTV footage, we got a picture of the suspect. Mr Boonkuer and other witnesses identified him for us,” Karon Police Deputy Superintendent Sophon Borirak.

“At the house, police seized one Samsung notebook, three Samsung mobile phones, one Sony digital camera and several valuable items, such as wallets and watches, with a total value of about 40,000 baht,” Lt Col Sophon told the Phuket Gazette.

“The suspect was charged with burglary. He accepted the charge and told police that he had burglarized homes in Nakon Sri Thammarat and had already spent time in prison,” he added.

Phuket Songkran: Four days without death on the roads