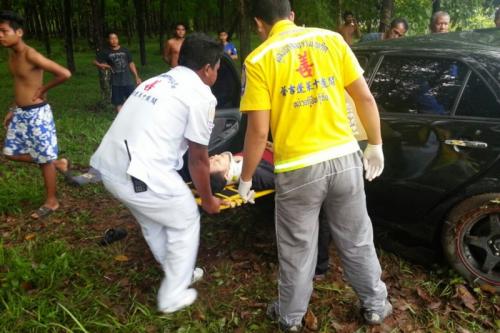 PHUKET: The fifth day of the Seven Days of Danger nationwide road-safety campaign came to a close at midnight last night with the death toll for the Thai new year holiday period in Phuket remaining at zero.

The Department of Disaster Prevention and Mitigation Phuket office (DDPM-Phuket), which collates all road accident statistics in Phuket during the campaign, reported two motorbike accidents and one car accident between midnight Sunday and midnight Monday.

The first accident for the day occurred at 12:10am, when Jongdee Panakul, 27, was driving his motorbike drunk and collided with a van on Sakdidet Road. His right arm was broken in the impact.

The second accident reported occurred at 7:45am, when a Toyota Vios being driven by 46-year-old Phuket native Thanakit Chaokhaked left Thepkrasattri Road at speed along Bang Duk Curve in Thalang. Mr Thanakit suffered a broken hip in the crash. Rain which made the road slippery was identified as a contributing factor to the accident.

At 3:55pm, Narin Moonrad, 38, was riding his motorbike when it collided with the back of a pickup near Soi Palai on Chao Fa East Road.

All of the accident victims were taken to Vachira Phuket Hospital in Phuket Town for treatment.

– Riding a motorbike without wearing a helmet – 212 people

– Driver and/or passengers failing to use seat belts – 13

– Driving under the influence of alcohol –18

– Failing to stop at a red traffic light – 1

– Using a mobile phone while driving – 0