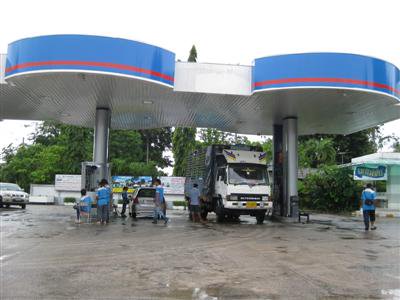 CHALONG: A mix-up at a gas station in Chalong caused large headaches for a number of motorists on Monday morning.

A number of customers who thought they were getting benzene 91 ended up with a tank full of diesel, causing their vehicles to grind to a halt shortly after setting off from the station.

The owner of the station, who asked not to be named, said that around 20 motorbikes and 10 cars were affected.

One unlucky customer, posting on the popular Thai Visa/Phuket Gazette forum, wrote on Monday, “There are lines of people at the gas station to lodge complaints.”

“The repair involved changing the plugs and points, cleaning out the fuel line and the tank, and leaving the car for two days at the mechanic,” the poster wrote.

“Those customers who have made complaints are receiving some satisfaction since the gas station management is willing to reimburse the victims for their repairs on presentation of receipts,” the poster added.

The owner of the station said that the problem was spotted quickly and that the benzene 91 tank has been cleaned out.

“It was a mistake and we’ll take responsibility to fix any problems it’s caused. Anyone affected should contact the station,” she said.

Body of Caucasian found washed up on Phuket beach