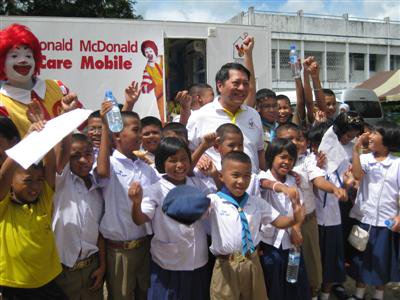 The event, at a mobile eye clinic parked on the grounds of the Phuket City Municipality offices, was attended by Phuket Vice-Governor Tri Augkaradacha and other city and provincial officials.

The event was funded by the RMHC Thailand, now in its seventh year.

The charity also set up a children’s learning and play room at Phuket’s Vachira Hospital as part of its activities on the island.

RMHC Thailand Vice-Chairman Hester Chew said an important aim of the project is to help out kids who are having trouble in school because they can’t see the whiteboard.

One child tested on Wednesday had 300 degrees of nearsightedness that was never picked up on by his parents or teachers. The classroom for such a child would appear little more than a blur, Mr Chew said.

Undetected vision problems are the main reason – even ahead of poverty – that Thai children drop out of school, he added.

Of those tested in the clinic, at least one-third need glasses, which they receive on the same day.

Since its inception last October, the mobile clinic has screened 4,800 children and provided 1,700 pairs of glasses, Mr Chew said.

The clinic operates all year round and visits two provinces per month. Funding is supplied by 43 sources, including donation boxes at McDonald’s fast food outlets, donations from the company’s suppliers, as well as a percentage of the income on sales of the company’s Happy Meals for kids, he explained.

“It is our way of giving something back to the community,” he said.

He declined to say where the two new restaurants would be located.