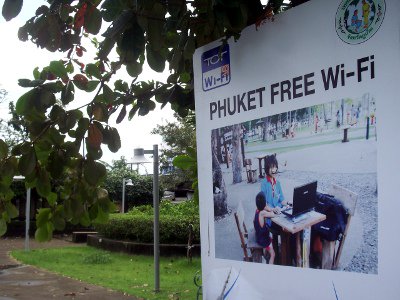 The TOT has signed a contract to provide 24-hour access in both areas for three years, the municipality agreeing to paying 180,000 baht annually for the service.

Phuket City Mayor Somjai Suwansupapana said the project targets an initial 600 users a month, with each user expected to stay online for about two hours per session.

“We expect Phuket to become a ‘learning society’,” she said.

The TOT began testing the service on October 1. The Saphan Hin service is already operational, while the service at Queen Sirikit Park is expected to be up and running “soon”.

Pamphlets promoting the service, with details of how to log on and the operational range of the network, became available from today.

“The free Wi-Fi service is not only to help people communicate better, but also to create the image of a modern Phuket lifestyle blended with local identity,” Mayor Somjai said.

The TOT launched a similar project with Wichit Municipality in March, providing free Wi-Fi at Sriphuwanart Park in Wichit.