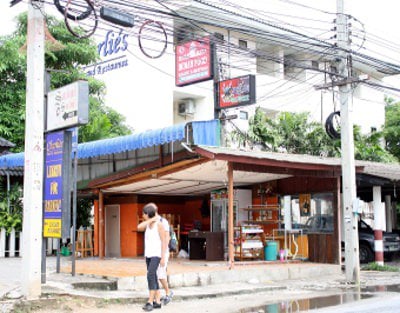 PHUKET: Chalong Police are looking to question a fellow police officer over his alleged role in the demolition of a bar in Kata.

Boonlert Thamsue, owner of what was until recently the ‘So Nice’ bar near Club Med, told police that Pol Maj Wichan Suwannasit arrived around 8am yesterday with four other men and pulled down his bar.

Chalong Police said Maj Wichan, originally from Nakhon Sri Thammarat, had been trying to evict Mr Boonlert since he bought the plot for two million baht in May.

But Mr Boonlert claims he has a valid rental agreement for the plot signed for seven years. Before the ‘So Nice’ bar, which he opened two years ago, he ran a taxi service center at the same location.

Maj Wichan filed a complaint to evict Mr Boonlert in April. The case is now in court.

Now Mr Boonlert wants to press charges against Maj Wichan, who was once stationed in Chalong, for destroying his property.

They have already issued a summons for him to come in for questioning.