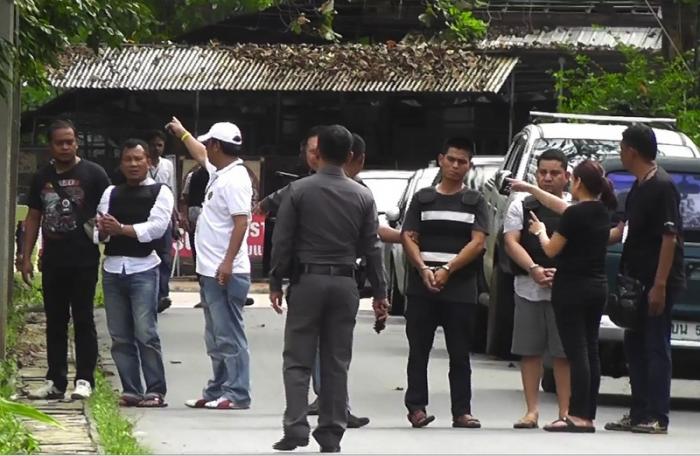 HUA HIN: Four foreigners were arrested in Hua Hin on Wednesday for breaking into a car and stealing 188,000 baht in cash in Surat Thani on Monday.

The suspects were named as Nofadly Bin Bakhtiar from Malaysia, and Asis Bin Bakar, Agung Pratama and Arie Darma from Indonesia.

“On Monday, the victim, 72-year-old Niyom Srisawat, withdrew 188,000 baht in cash from a Krung Thai Bank branch in Surat Thani about 10:30am. He put the money in a brown envelope inside his pick-up truck and then drove to Wat Klang Mai,” said Surat Thani Provincial Police Commander Apichart Boonsriroj.

“He parked his truck there and walked into the temple. When he returned to his truck about 12:30pm, he found that the window of his truck had been smashed and the cash taken.”

The suspects had rented a car in Chonburi last Tuesday. CCTV footage showed them fleeing to Hua Hin after the incident, so Surat Thani police coordinated with their counterparts in Hua Hin to make the arrest.

Mr Bakhtiar was the driver, and Mr Bakar and Mr Pratama kept lookout while Mr Darma broke into the car and stole the money. All four men confessed to conspiring and were charged with theft.

The suspects had reportedly already spent about 20,000 baht of the stolen money, but Mr Niyom was able to recover the rest.

A similar incident occurred in Surat Thani last month when a group of foreigners broke into a car, smashed the window, stole 1.5 million baht and fled the country.

“Please be careful when handling large amounts of cash, and if you see something suspicious, report it to the police as soon as possible,” said Gen Apichart.