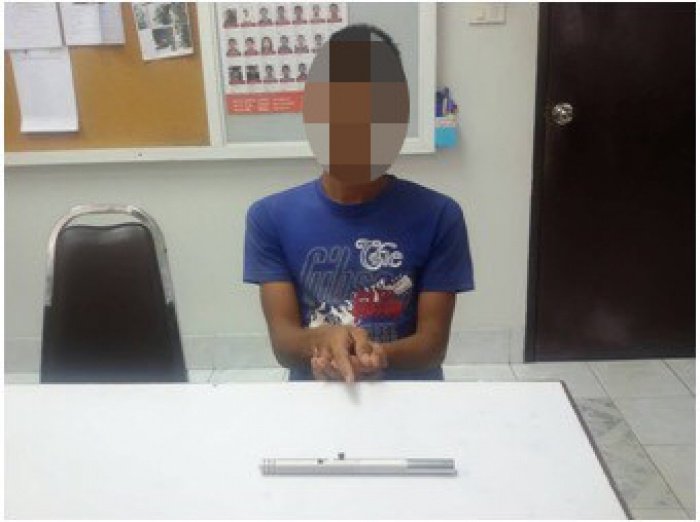 PHUKET: Four men from rival Phuket gangs were charged for the slaying of a 15-year-old during the closing procession of Phuket’s renowned Vegetarian Festival last week.

Three of the four men turned themselves in at Phuket City Police Station on Saturday, handing over their firearms as they did so.

A fourth alleged Wan Wai gang member, who is only 16 years old, was named by police as ‘Mr A’.

“We had to go out and get Mr A. When we arrested him, we found him in possession of an illegal firearm and seven rounds of ammunition,” said Lt Col Somsak Thongkliang of the Phuket City Police.

Mr Thanapon, Mr Chinnakrit and Mr Pattompong have all denied killing 15-year-old Thanakij Sawirum behind the Lucky Complex, the abandoned building at the entrance to Saphan Hin (story here).

“We conducted ballistic tests with the firearms presented by the men after letting them out on 300,000-baht bails,” said Col Somsak. “Following the testing on Sunday, we called all four men back to the station and pressed charges for the illegal possession of a firearm and matching ammunition, as well as murder and attempted murder.”

The men were four of the five suspects that arrest warrants were issued for on Thursday (story here). A sixth warrant was issued on Friday.

“We are waiting for the other suspects to turn themselves in. However, if they fail to do so, we will go out and get them,” Col Somsak said.