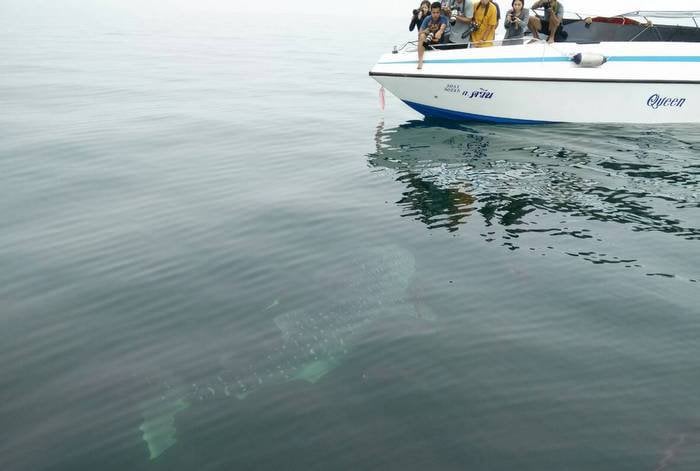 PHUKET: Tourists and officers were delighted when they spotted a school of whale sharks off of Phuket’s coast this weekend.

After receiving reports of an injured whale shark, Than Bok Khorani National Park officers took a boat out to see what assistance, if any, could be rendered.

“We found a school of five swimming between Koh Hong and Koh Yao Noi. Luckily they were all healthy, no injuries at all,” said head of the Koh Hong National Park team, Jumpen Pompakdee.

“The biggest one was maybe 12 meters long and about two tonnes. They are peaceful giants that eat plankton and pose no threat to people. Interestingly enough, there were a number of equally harmless black-tip reef sharks schooling with the whale sharks.”

Mr Jumpen called on all fishermen and tour boat operators to act responsibly to prevent injuring or scaring away the majestic creatures.

“If we create an environment that they can be happy in, they will keep coming back every year,” he said.

Whale sharks are occasionally spotted in the region between October and December, as the area becomes rich with food. However, such a large school of whale sharks was an unusual treat for the tourists who had the chance to see them, explained Mr Jumpen.