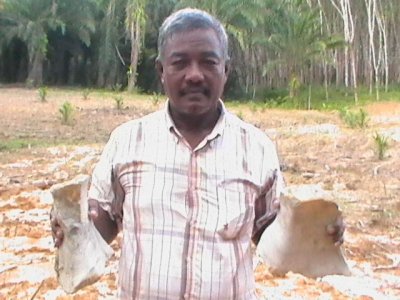 Since the original discovery, Chob Pankaew has had regular visits from the residents of Nong Phak Bung village in Klong Thom district, all coming to see the fossils.

“Two weeks ago, I was clearing the land ready to plant oil palm tress. I had dug down to about two meters when I found fossil shells and one big bone, which looks like it may have come from an elephant,” said Mr Chob.

“I had no idea there were fossils under my plantation,” he added.

Some villagers even believe the large bone Mr Chob recovered from the ground might have belonged to a dinosaur.

The villagers believe that thousands of years ago the whole area was under the sea, the only conditions that would rationally explain the find.

They now want the experts to inspect the area and tell them more about fossils and how they came to be under Mr Chob’s plantation.

Live Wire: Is Phuket smart enough for the iPhone 5?