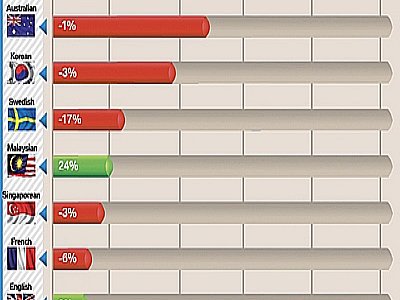 PHUKET: The Phuket Provincial Government recently published its economic summary report for the first six months of the year (F6M12). The in-depth report highlights year-on-year (y-o-y) figures and trends in trade, consumerism, and in the island’s tourism, property, investment and agricultural sectors. Here, the Phuket Gazette outlines some of these.

Tourism
The total number of tourist arrivals in F6M12 remained steady with 1,336,068 arrivals counted by Phuket immigration – a y-o-y increase of only 0.44%. While the number has not changed much, the composition of that number has.

Chinese and Russian tourist arrivals have jumped y-o-y by 63% and 35%, respectively, replacing traditional European groups as Phuket’s top tourists. Malaysian tourists have also increased significantly (+24%), which was cited to unrest in the Deep South.

Meanwhile, only 115,415 tourists arrived by boat, down 27.74% y-o-y. This stagnant growth was cited to the world economic crises which has particularly affected Phuket’s traditional tourist source markets of Sweden, Germany, Finland, Australia and USA. The report also cites the series of small earthquakes in April having an affect on arrivals, but only in the short run.

Business and Investment
In the F6M12, the Board Of Investment (BOI) approved three projects in Phuket with a combined worth of 60mn baht. This value is 98.34% less than projects approved during the same period last year, when more high-worth hotel related investments were approved. The BOI-approved projects in F6M12 included an agricultural byproduct/scraps production plant in Talad Yai, Muang district, worth 40mn baht; a steel production plant in Sri Sunthon, Thalang worth 19mn baht, and a software company worth 1mn baht.

There were a total of 849 new companies registered, representing a 7.88% increase y-o-y. The combined registered capital of these companies was 1.867bn baht (-24.48% y-o-y). Mostly involving real estate, hotel and tourism, restaurants and construction contracting, 58% of the companies are located in Mueang district, with 27% in Kathu and 15% in Thalang.

Real Estate
Construction projects spanning a total of 989,422 square meters were approved (-6.58%) in F6M12. Of these, residential space (single houses, duplexes, townhouses and condos) represented 731,057 sqm, which was 8.59% less than the previous year. These projects were located mostly in the sub districts of Patong, Sakoo and Koh Kaew.

Meanwhile, approved commercial, and particularly hotel space, represented 169,455 sqm, a y-o-y jump of 26.75%. Most of the general commercial space was located in the Sri Sunthon sub district of Thalang, with the hotel space being in Patong. Other types of construction projects approved represented 89,910sqm, and mostly included sports and recreational facilities, clubs and swimming pools.

Agriculture
Rubber supplies in F6M12 slowed due to the fact that during the previous year, raw rubber prices had increased in light of swelling demand in the growing automotive industry. At the beginning of 2012, a slowing world economy led to declining demand and orders in the world rubber market, particularly in the Chinese market – a key partner market of Thailand – causing local producers to reduce production, with average prices for Grade 3 rubber in Thailand dropping by 30% y-o-y (from 146.5 to 101.7 baht per kilogram – though even lower now).

A bulk of these fish (386.58mn baht) were what Thai fishermen classify as “Bpla Loei” which include a broad variety of sea fish such as Ornate Threadfin Bream, Fourfinger Threadfin, Common Ponyfish, Redcoat Squirrelfish and Obtuse Barracuda. This category was followed by tuna fish (257.41mn baht) and Indian Mackerel 71.79mn baht).

About 43% of these fish were sold in Phuket markets, while just over 47% were sold in other domestic fish markets including in Haad Yai, Bangkok, Krabi and Samut Sakhon, with 4.28% going to the National Tuna Factory and another 5.25% exported to countries such as Taiwan and Japan.

Consumerism
Consumer spending is on the up as indicated by a y-o-y increase in VAT (Value Added Tax) income of 8.44%, as well as an increase in new car ownership. No, you weren’t just imagining that traffic is getting worse. According to the Car Index, Phuket’s registrations of new passenger cars rose year on year by 18.31%, and 18.47% for pickup trucks. This is in contrast to a 7.19% decrease in registration of new motorcycles, indicating that the lower income economic tier are more hesitant to spend in light of the rising cost of living. Indeed, inflation continued to rise as measured by the CPI of various items as shown in the graph above.

Phuket Investor: Excuse me, what is QE3?