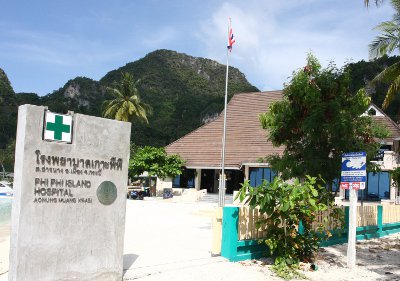 PHUKET: Hospital staff in Phuket have confirmed that “drowning” has been listed as the official cause of death of the 29-year-old Korean tourist found dead while snorkeling at Phi Phi Island on Saturday.

An International Department officer at Vachira Phuket Hospital confirmed to the Phuket Gazette that the Jungkook Kim, initially named by Tourist Police as “Jury Kuk Kim“, was the same person. Doctors at Phi Phi Island Hospital declared Mr Kim had died by drowning before his body was transferred to the Vachira facility in Phuket Town.

“Mr Kim’s body was first taken to Phi Phi Island Hospital for medical examination, where it was examined to determine the cause of death,” the officer explained.

Medical staff at Phi Phi Island Hospital told the Phuket Gazette today, “We found no wounds on the body, but we found water in the lungs, so we have determined the cause of death to be drowning.”

The doctor, who asked not to be identified, declined to comment further on process of determining the cause of Mr Kim’s death.

However, the doctor did elaborate that no autopsy was performed at the Phi Phi Hospital, as that facility does not have the resources to conduct such an in-depth examination.

“In this particular case, we asked the police to which hospital we should forward the body to, which ended up being Vachira Hospital in Phuket,” the doctor explained.

Staff at Vachira Hospital morgue told the Gazette that Mr Kim’s body was collected by South Korean embassy officials at about 4pm today.

Family members were not present.

“We have not received any request from the family to investigate further about Mr Kim’s death,” the hospital staffer said.

Lt Siwa Saneha of Phi Phi Island Police Station told the Gazette that Mr Kim’s relatives have accepted drowning as the cause of death.

“We were notified of the cause of death by the hospital, and we passed that information on to Mr Kim’s family. They have not expressed any doubt in that conclusion and have not requested an autopsy be conducted,” he said.