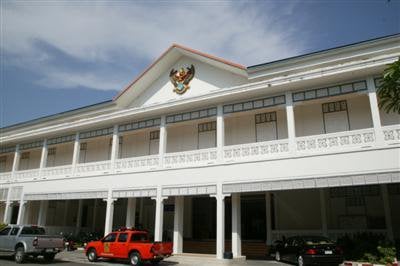 PHUKET: Foreign visitors to the region and local expat residents will soon be able to take advantage of a local branch of the Ministry of Foreign Affairs to be established at Phuket Provincial Hall.

Phuket Governor Preecha Ruangjan told the Gazette on January 30 that he had received confirmation that day to go ahead with plans to establish the Foreign Affairs center, which will offer services similar to those provided at the Ministry of Foreign Affairs offices in Bangkok.

“The new Foreign Affairs branch should be up and running within three months,” said Governor Preecha. “There is no need to undertake any construction to house the new center as it will be established in existing rooms at Provincial Hall. However, it will take a while to set up the offices with furniture and equipment, including computers that will be directly linked to the ministry’s central offices in Bangkok,” he added.

Governor Preecha said that the center is a much-needed addition to the province as the number of annual visitors continues to increase.

“Phuket is recognized as one of the world’s top holiday destinations. The new center will help bring the island up to date in the eyes of foreigners,” he said.

Representatives from the Ministry of Foreign Affairs headquarters in Bangkok will be heading to Phuket to train local staff on a number of ministerial procedures. However, Governor Preecha was unable to confirm exactly when the center would be fully operational.

Once up and running, the center will be ‘online’ with the ministry’s offices in Bangkok.

“This will enable foreigners to carry out ministry-related procedures and process documents in Phuket without having to go to the ministry’s offices in Bangkok,” he said.

Governor Preecha explained that the center will also be a venue for holding training seminars for businesses and individuals involved in the tourist industry.

“It will be a place where we can learn more about the cultures of different nationalities in order to help us better serve the variety of foreign visitors that make up the tourist sector,” he said.

The range of services available at the Ministry of Foreign Affairs typically includes consular affairs, such as the arrangement of visas and travel documents for Thai nationals, verification procedures for processing marriages between foreigners and Thai nationals, advice and authorization of naturalization procedures, and legal advice.