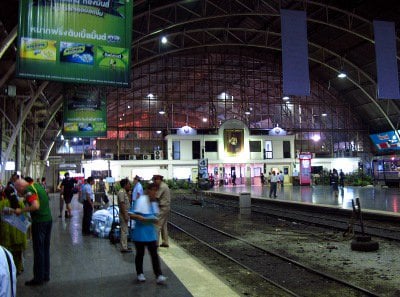 PHUKET: Floods in Bangkok have forced trains bound for Surat Thani, a popular jump-off point for tourists heading to Phuket, to start from the Nakhon Pathom railway station, on the west of the Thai capital.

An operator at the State Railway of Thailand’s call center today told the Phuket Gazette that the move to shut down Southern Line services at Bangkok’s central Hua Lampong train station was made yesterday as flood waters crossed the tracks used by southbound trains.

“We have free minibuses running between Hua Lampong and Nakhon Pathom Station for any passengers using trains on the Southern Line,” she added.

However, the operator urged travelers to keep abreast of the flood situation Bangkok as the minivan services might be called off at any time due to rising flood waters.

She added that full refunds were available for travelers wanting to cancel their trips.

Using Nakhon Pathom Station as the terminal for Southern Line trains is only a temporary measure, said the operator.

“As soon as the situation returns to normal, we will return to operating all trains from Hua Lampong,” she said.

Meanwhile, the management of the New Southern Bus Terminal, the main terminus for buses from Bangkok to Phuket, has said southern bus services will relocate to Suvarnabhumi Airport if flood waters keep rising.

The bus terminal, located in Thon Buri, has been surrounded by floodwaters for days, with officials warning of further rises in water levels.

However, Chob Putthasupha, the Station Master at the bus terminal, told the Gazette today, “We are still fully operational for all buses heading to Southern Thailand. Although the whole Pinklao area is flooded, we have not yet been affected by the flood waters.

“If the situation changes, our backup plan is to operate all buses to the south from Suvanabhumi, where we already run several bus services to Southern Thailand,” he said.