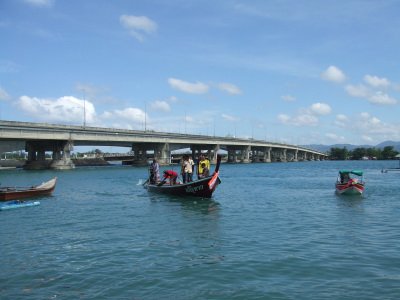 PHUKET: A search has been launched for a pair of troubled lovers who were last seen on Thepkrasattri Bridge and are now missing, believed to have leaped into the fast-flowing waters heading out to the Andaman Sea.

Tah Chat Chai Police Duty Officer Watcharin Jiratikarnwiwat received a report just after midnight last night that a man and a woman had “jumped” from the Thepkrasattri Bridge, which links Phuket with the mainland.

At the scene, Maj Watcharin found an abandoned white Toyota Vios parked halfway across the bridge and a pair of women’s shoes outside the car – there were no people in the area.

Items inside the car were in a state of disarray and it looked as if “things had been thrown around after a fight,” he said.

It is believed that troubled young lovers Nattaphon Sitthiyanon, 25, and Chanokporn Aimauksorn, 27, took their problems to the bridge and ended up disappearing into the waters below, Maj Watcharin said.

“I talked to some fishermen who regularly fish in that area and they didn’t see the moment the couple jumped, but they heard a ‘splashing’ sound as they hit the water,” he said.

CCTV footage from Tah Chat Chai checkpoint showed the white Vios leaving Phuket at 1:19pm yesterday. Police are in the process of checking footage from other CCTV cameras in the hopes of learning more about the couple’s activities after leaving Phuket.

The family of Ms Chanokporn arrived at Tah Chat Chai Police Station this morning to give information.

“They [Ms Chanokporn and Mr Nattaphon] were lovers, but recently they’ve had many problems – they always argued,” Ms Chanokporn’s brother said.

“They rented a car together and the next thing I know, she had jumped off the bridge with her boyfriend.

“I don’t believe my sister would do that. I believe her boyfriend pushed her off the bridge,” he said.

Mr Natthaphon and Ms Chanokporn worked together at Blue Canyon Country Club and had been “together for a while”, police said.