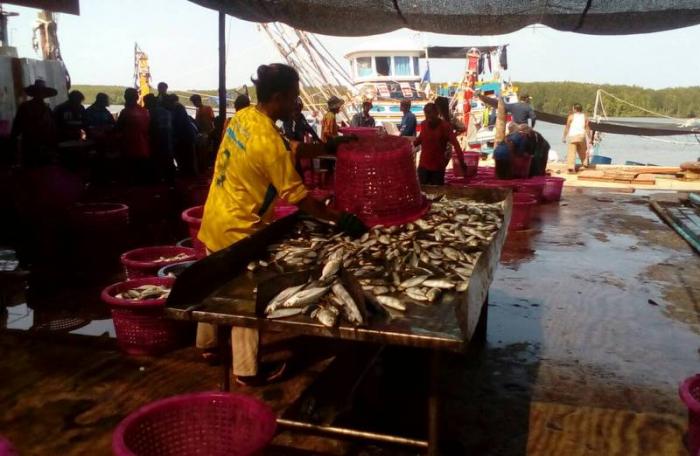 PHUKET: Fishermen from Krabi returned to shore yesterday disappointed with the meager quantities caught on the first day of fishing following a three-month hiatus.

Yesterday was the first day that large fishing vessels were allowed to return to fish in the Andaman Sea after 4,696 square kilometers between Phuket and Trang were closed off so as not to deplete fish stocks during the spawning season from April 1 to June 30.

More than 10 boats in Krabi returned to shore much earlier than usual with boat operators complaining that hardly any fish were caught.

“Please do not worry as it is just the beginning of the season. The monsoon, strong waves and rain can all contribute to the scarcity of fish,” said Mr Saen.

“We will monitor the situation over the next few weeks. If there is no improvement, we will take action to determine the cause. Meanwhile, we are keeping a strict eye to ensure that everything is being done legally.”

“It is quite strange that we did not find as many fish as we used to in previous years. Usually, we catch a lot of fish on opening day,” said Maren Boonroat, captain of fishing boat Nam Thawee.

Rewat Boonsop, owner of the Krabi fishing port, said he too was worried about the low yield.

“Most of the fish caught were quite small. The fishermen had been out at sea since before midnight on Thursday, but returned home with meager quantities on Friday morning,” said Mr Rewat.

Research suggests that most marine life in the Andaman breeds between April and June. This is a vulnerable time for the marine ecosystem, as many juveniles and breeding adults can be caught.

Protecting young fish is essential, because it can help replenish fish stocks to be harvested later by the fishing industry and boost the quality of marine tourism in the region.

Return of the Rajabhat roboteers [video]