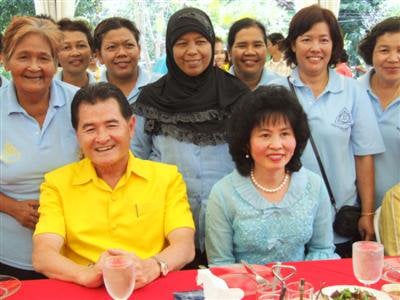 Mr Wichai was greeted at the Governor’s Mansion yesterday morning by numerous officials and well-wishers, some traveling from as far away as Phang Nga and Surat Thani to attend the ceremony.

Transferred to Phuket from his previous posting as governor of Sing Buri province in the Central Plains region, the native of Nakhon Pathom turned 59 last Thursday.

Married to Mrs Thaisika, he has two grown-up children from his former wife.

The holder of a bachelor’s degree in political and administrative sciences from the Ramkhamhaeng University Faculty of Law, Gov Wichai is no stranger to the South. He served as Phang Nga governor for a year starting in 2006.

He also has extensive experience in the Interior Ministry’s Land Department, having been Land Office Director in Nakhon Pathom in 1997 and Deputy Director, in 2003, of the Land Department nationwide.

Gov Wichai admitted to being somewhat overwhelmed by the sudden nature of the transfer and said he expects the challenges facing him in Phuket to be very different from those he faced in Phang Nga.

Improving the island’s tourism-based economy is top of his agenda, but to achieve this will take a great deal of study and research from the outset, he admitted.

Mr Wichai replaces former Governor Preecha Ruangjan, who, despite serving less than five months in office, gained wide respect for his energetic efforts to learn about and improve Phuket.

Many political observers think the reshuffle is intended to reduce the influence of former Prime Minister Thaksin Shinawatra in the northern provinces, where he still has strong support.

There was speculation in the Thai media that Mr Preecha’s departure was prompted by the influence of local Democrat Party heavyweights.

Such speculation seems invalid, however, as the Interior Ministry portfolio is now in the hands of the newly formed Bhumjaithai Party, which is influenced by banned Buri Ram politician Newin Chidchob.

Mr Newin is a longtime adversary of the Phuket Democrats, dating back to his role in the SorPorKor-401k land scandal that brought down the first Democrat-led government of Chuan Leekpai in 1995.

Gov Preecha was quoted in the local Thai-language media as saying he didn’t think his transfer order was politically motivated.