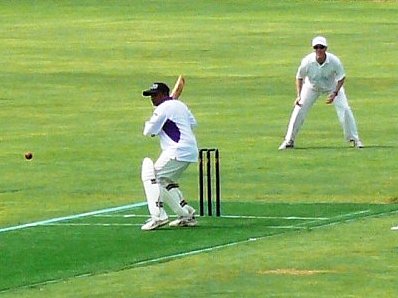 PHUKET: The highly anticipated Island Furniture Cricket League’s maiden match at the new Alan Cooke Ground (ACG) did not fail to disappoint on Sunday with a great exhibition of fielding and batting provided by both Laguna CC and Patong CC.

However it was a more consistent performance by Laguna that eventually decided the victory.

Laguna were put into bat on a damp wicket with a slow outfield and made steady progress with their two openers Mike Ayling and Bill Stahmer.

Joshi Naresh bowled Ayling for 21 runs and Stahmer fell for 25. With the score at 71, Sameer Kahn and Andrew Cole entered the fray and pushed the total to 91 after 20 overs.

Kahn was dismissed for 18 runs after his attempt to hit a six was brilliantly caught by Dean Noble at deep mid wicket, close to the boundary.

John Anderson joined Cole for the remaining overs, both hitting 35 not out with good stroke-play and tallied a 61 run partnership.

Kishor Jaghta was Patong’s best bowler with figures of 2 for 29, and after 40 overs, Laguna had managed to reach 178 for 5, despite the committed efforts of Patong’s fielders.

Richard Desmond and Noble opened for Patong and showed confidence in their opening salvo of shots.

Lijo Jose, somewhat unsure of how to deal with the rangy Desmond, eventually trapped him lbw coming around the wicket for 17 runs.

Noble was joined by Neil Quail at the crease and the pair took the score to 47 after 10 overs.

The next 10 overs decided the game with Patong losing 6 wickets for just 53 runs.

Patong’s tail-end offered more resistance than the middle order, and they valiantly pushed the score to 131and lost just one wicket with Pat Cotter notching up 15 runs.

Laguna needed only three more overs to bowl out Patong for 149 and secure their first league win of the 2011/2012 season.

Khan picked up the day’s best bowling figures of 4 for 39.

Next weeks Sunday league encounter at the ACG will see competition newcomers, Thanyapura Tigers, tackle exuberance and youth in the form of the Phuket Leopards.

The Phuket Gazette is proud to serve as official media sponsor for the ACG. Watch this space for detailed coverage of all games as well as developments at the ACG itself.

John Terry wants to come out