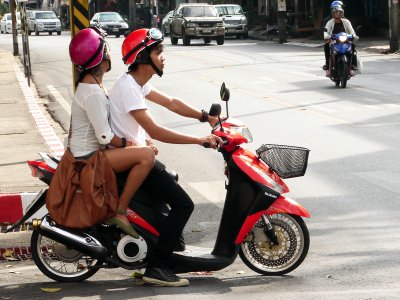 PHUKET: A motorbike rider without a helmet has been reported as the first Phuket road fatality of the New Year.

The body of Uthai Maikhong, 33, was found beside his bike in a three-meter-deep roadside drainage ditch in front of Wat Muang Mai in Thalang about 8am yesterday.

Local residents heard an accident about 7pm the night before, but in the dark they failed to find any evidence of an accident, Lt Col Adul Nirapai of Thalang Police told the Gazette today.

Lt Col Adul said that a wound to Mr Uthai’s chest indicated that it was likely he died after being impaled by a discarded steel reinforcement bar found near his body.

Although the accident occurred on Thursday night, the death has been recorded as the first of 2011 because the Department of Disaster Prevention and Mitigation (DDPM) received notification only today.

The accident came just before today’s launch of island-wide enforcement of the helmet law.

Police did not find a helmet at the accident scene in Thalang.

The fatality was also the first for Phuket during the ‘Seven Days of Danger’ national road safety campaign.

Twelve accidents involved motorbikes and one involved a mini-van. A Gazette reader reported, “There was a big accident with a mini van that rolled over just after the Yacht Haven Marina. The roof was flattened and it was very bent out of shape.”

From those accidents, 13 people were admitted to hospital for minor injuries, two in Phuket Town, five in Kathu and six in Thalang.

Ten of the people admitted were men and three were women. One was a child under 14 years of age.

The latest statistics bring the Phuket road toll to one dead and 32 people admitted to hospital since the campaign began.

The Nation today reported the national road toll at 151 deaths.

Phirapat Booncharoen, an assistant to the justice minister, said motorcycles were involved in 84.46 per cent of the road accidents, the report said.