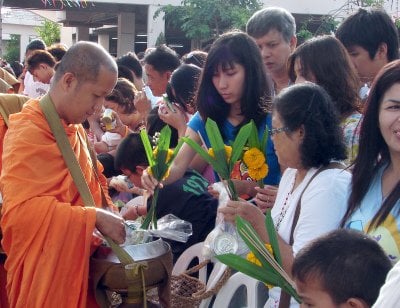 PHUKET: About 1,000 people from across Phuket joined an alms-giving ceremony in Phuket Town this morning to offer food to 229 Buddhist monks to welcome the new year of 2011.

The three Vice Governors and Mayor Somjai wished the crowd new year’s blessings before setting free birds at 8am.

“We gather here today to offer food to the monks to bring good luck to you all in your lives and to honor and maintain a traditional religious ceremony,” said Mayor Somjai.

The provincial dignitaries then began the alms-giving ceremony, leading the crowd in giving food and flowers to the monks.

After the alms-giving to the monks, some of the crowd continued their new year spirit and gave coins to a small group of sea gypsy mothers and children gathered sitting on the ground nearby.

Phuket Person of the Year Award a triumph for charity