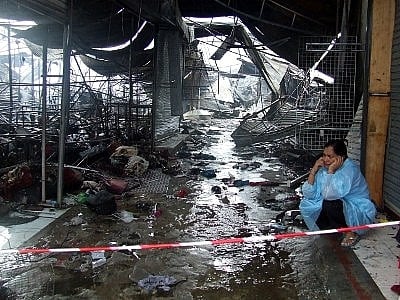 PHUKET: A large fire ripped through an undercover clothes market of more than 200 stalls in the heart of Patong, on Phuket’s west coast, early this morning.

The fire broke out at the Koh Kaew Market, next to the Jungceylon shopping complex on Rat-U-Thit 200 Pi Road, at about 3am.

Six fire trucks and more than 20 firefighters arrived to extinguish the blaze, taking more than two hours to bring it under control.

An officer from the Patong Municipality office told the Phuket Gazette that no one had been injured in the blaze.

“I’m not sure what happened as the place was already on fire when I arrived,” market vendor Wilasinee Wiwatthanit, 23, told said.

“The fire burnt through the whole market in about two hours. It seems that it started at the back of the place,” she added.

Ms Wilasinee said the shop owners did not have any insurance coverage as policies were not offered for indoor markets like the Koh Kaew Market.

Fire investigators this morning are still inspecting the rubble to determine the cause of the blaze.