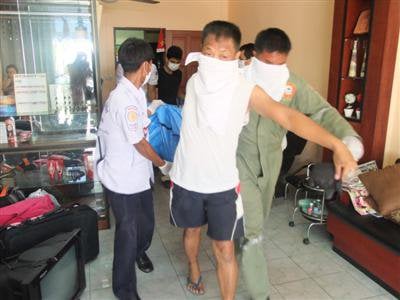 PHUKET: Police are not treating as suspicious the death of a Finnish tourist found in his rented room opposite Patong Municipality offices yesterday.

Capt Weerapong Rakkittoo of Patong Police said he was notified of the death at about 2:30pm.

At the scene, a rented room on the second floor of a shop-house on Ratchapatanusorn Road, Capt Weerapong found the body of a foreign man lying on the bed, covered with a blanket.

Police believe the man died about four days before his body was found.

Inside the room, officers found the man’s wallet and about 500 baht in cash, but no passport.

Police believe the passport was being held by a local motorcycle rental operator.

Capt Weerapong said a driving license in the wallet identified the deceased as Bjarne Siguard Lindberg, 54, from Finland.

He added that no signs of violence were found in the room and as officers found medication for a heart condition and for diabetes, police believe the death was from natural causes.

However, the body was taken to Patong Hospital for further examination as a precaution, he said.

The neighbor who called the police after noticing a foul smell coming from Mr Lindberg’s room also said police should investigate further.

Thanitsara Rodphee, 28, from Samut Prakan, told the Gazette that Mr Lindberg appeared to be wealthy – he paid six months’ rent totaling 42,000 baht in advance and often lent money to a woman called “Lin”.

Lin rents the building from the owner and runs a salon on the ground floor. She lives in one of the rooms and rents out the remaining three rooms above the salon, Ms Thanitsara said.

Apparently in financial trouble, Lin owed a local loan shark a lot of money – and she has not been seen since Mr Lindberg’s death, said Ms Thanitsara.

Lin was last seen with Mr Linderberg, who she called “DJ”, on February 23, she added.