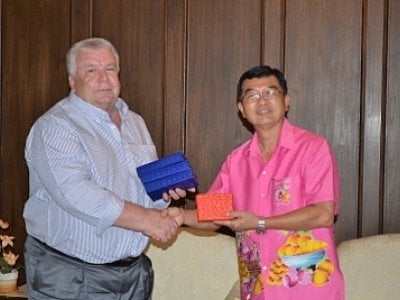 Nakhodka, on the Sea of Japan near Vladivostok, has been Phuket’s sister city since September 2006.

Mr Gladkikh hopes relations between Phuket and Nakhodka develop to a similar level as those of their other sister cities such as Mizuru, Japan and Donghae, South Korea, he said.

“These cities are located closer to Nakhodka than Phuket so delegations often visit our city and ours visit them as well,” Mr Gladkikh said.

“I want to invite Thai government representatives to visit Nakhodka. I vacation in Thailand two or three times a year and would enjoy hosting a delegation from Phuket,” added Mr Gladkikh.

“We are delighted to accept your invitation. A Phuket delegation will visit Nakhodka soon,” he said.

Mr Gladkikh’s son, Grigory, lives in Phuket and works in the hotel industry.

“Nakhodka is a small city like Phuket, but we don’t have an airport. However, I believe there will be a direct flight from Vladivostok to Phuket in the near future,” explained Grigory.

“Being your sister city for nearly five years, we have helped to promote and advertise Phuket to the citizens of Nakhodka. Our people very much enjoy coming here,” Grigory said.

Grigory suggested the best time to visit Nakhodka would be March when it is not too cold and there is still snowfall.

“We have snow and ice which some Thai people may not have experienced before,” he said.

“We would like to return the same hospitality as Phuket shows holidaymakers and long-term residents from Nakhodka,” Boris Gladkikh said.

Mr Gladkikh is scheduled to return to Russia on March 8.