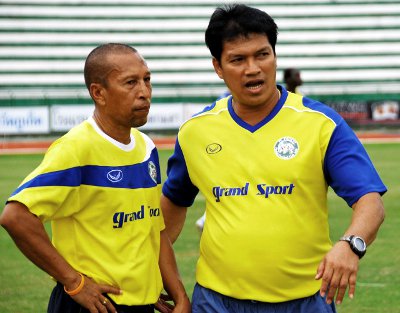 The coach, who goes by the nickname “Rock Rhino”, rejoined the team on Wednesday following a leave of absence he took last month to tend to his flooded house in Bangkok

Ahead of Sunday’s bout against 13th-placed Chanthaburi, Coach Sompong told the Phuket Gazette that a few key players will be not be available for the match.

Suphat and Nithirot are not match fit, while Abdoul and Watcharapong are banned due to previous bookings, he said.

“For scoring goals, I will rely on Kone Adama in place of Pae, in addition to Tameezee ‘Z’ Hayeeyusoh and Poramut ‘Mut’ Krongborisut,” he said.

“In the backs, I will put in Nitipong ‘Bas’ Limsuwan, who was injured from the last match with Saraburi, if he recovers in time, but if not, I will decide later who will play in his place,” he said.

The Rhino also talked about the prospects of Phuket’s other leading scorer, Sarach “Tang” Yooyen.

“He is not fully mentally focused on the match due to his father’s illness, which is affecting his performance a bit. Tang admitted to me that he is not at his best right now. Anyway, he promised to work on it. I will wait until the last minute to see if he is ready or not,” said Coach Sompong.

Regardless, Rock Rhino was confident Phuket will bag all three points on Sunday.

Meanwhile, defender Suphat returned to light training on Monday after resting from his injury sustained in the “friendly” match against the Thailand U23 squad on November 3.

“I have to do fitness training. Today is 15 minutes jogging and some dribbling. This is to test whether my muscles are ready for harder training,” he told the Gazette.

“I hope I can be a substitute in the away match with Buriram FC on December 11,” he added.

Phuket are now in 5th place with 43 points after 27 matches. They trail 3rd place BB Chula United by 13 points and still have two games in hand.

Including this Sunday’s encounter, Phuket have seven games remaining this season: four at home and three away.

Chanthaburi are the underdogs for Sunday’s match, with only 31 points after 29 matches.

In their last meet on May 21 in Chanthaburi, Phuket managed to let their lead slip away when the final whistle dictated a 1 – 1 finish.

Kickoff for the rematch at Surakul Stadium on Sunday is set for 6pm.

Phuket’s Ironman 70.3 brings in the champs