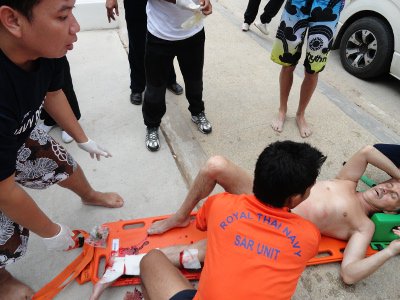 PHUKET: A 51-year-old Russian man on holiday in Phuket was rushed to hospital today after suffering severe injuries when he was run over by a parasailing speedboat at Kata Beach.

The man, Nikolai Nefedov, suffered a broken left leg and cuts on the back of both thighs.

Some of the cuts were were down to his bones, said Chaiwat Sittidet, an officer at the Royal Thai Navy Sea Rescue SAR Unit stationed at Kata Beach.

“Witnesses told us that the man was swimming in water only about three meters deep when a parasailing speedboat hit him,” said Mr Chaiwat.

Mr Nefedov was quickly rushed to shore at the northern end of the beach by speedboat.

“We are not sure whether it was the same speedboat that hit him,” Mr Chaiwat added.

Mr Nefedov was conscious throughout the ordeal, he added.