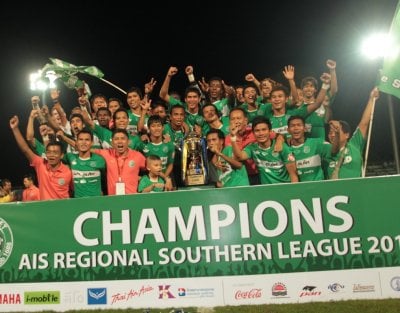 PHUKET: Goals either side of halftime from Thawin Butrsombat and Nithirot Sukuma were enough to ease FC Phuket to a 2-1 home win over Phang Nga FC at Surakul Stadium last night.

Thawin, signed during the mid-season break, put the Southern Sea Kirin 1-0 up after just seven minutes, when he kept his composure in the box to finish off a sweeping five-man move that began deep in the FC Phuket half.

Nithirot slotted home a second after 56 minutes when Diarra Ali’s shot rebounded off the goalkeeper after the African star had sprung the Phang Nga offside trap to run onto a clever through ball from defender Ronnachai Jinaket.

With 15 minutes remaining, the visiting side pulled a goal back but FC Phuket held on for the win to complete a memorable league campaign which has seen them collect 55 points.

Despite a couple of anxious moments, the home side closed out the match and after the final whistle collected the league trophy in front of their delighted supporters.

The celebration included the players hoisting Phuket Provincial Administration Organization President Paiboon Upatising into the air and a fireworks display.

FC Phuket will now go into training for the playoffs for promotion to the first division.

Also qualifying for the playoff will be Trang FC, who secured the second place spot with a 1-0 win at home over Hat Yai FC last night.