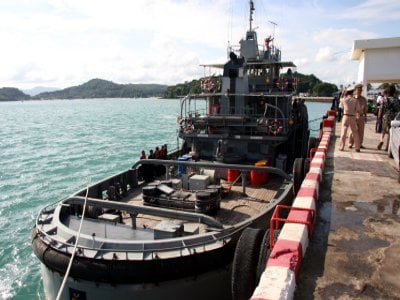 PHUKET: The mission to raise the sunken Choke Taworn 6 and its cargo of diesel fuel was postponed yesterday due to rough sea conditions. The effort will resume at 10am today, weather permitting.

Rear Admiral Nawin Thananet, Chief of Staff of the Royal Thai Navy’s Third Area Command, said yesterday that visual inspection of the diesel tanks by divers revealed they are still intact with no signs of leakage.

Divers from a private firm, hired by the vessel owner, yesterday managed to rig the sunken vessel with some 35 empty plastic air containers, about 70% of those needed to conduct the operation. Once all 50 are chained in and around the vessel, air will be pumped into them from the surface.

After the containers are filled with air it should take about four hours to raise the vessel to the surface. The owner of Choke Taworn 6 told officials that the company had once before salvaged a vessel under similar circumstances using the same technique, RADM Nawin said.

The owner estimates that about 25,000 liters remain after Choke Taworn 8, a sister vessel of Choke Taworn 6, managed to pump off a good deal of fuel before the vessel went down. It currently sits on the seabed at a depth of about 35 meters.

Once raised, the remaining fuel will be pumped onto two other vessels.

Two navy ships will assist in the operation and be prepared to deal with any leakage that might occur during the refloating effort.

HTMS Rang is equipped with 3,200 liters of chemical dispersant supplied by PTT.

The navy and the Department of Marine and Coastal Resources (DMCR) have agreed to guidelines for the safe use of chemical dispersants, if they are required.

The liquid will not be injected into water less than five feet deep or withing 500 yards of any shoreline, as this could do more harm than good to the marine environment, he said.

A DMCR vessel will also take part in the mission, departing from the Phuket Aquarium pier at Cape Panwa at 1pm with officials and members of the local press.